The largest destination club in Europe, The Hideaways Club, has just announced that the UK's top tennis player has become Ambassador for, and a member of, the club. 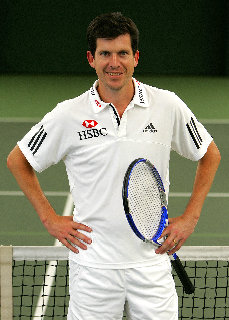 Tim Henman
Commenting on his membership Tim Henman said, "I am delighted to accept the role of Ambassador for such a prestigious and exciting company. Having traveled the world for so many years I've frequently thought about owning somewhere abroad where I can take my family on holiday but always held back because I didn't want the added responsibility of owning a house overseas and didn't want to be tied down to one place."

Henman continued "In The Hideaways Club I have found the perfect solution. A wide variety of beautiful properties in stunning locations that I can use year round without all the attendant costs, concerns and hassles associated with owning my own house plus the potential growth of my investment. The whole concept of fractional ownership makes total sense to me and I greatly look forward to enjoying the variety of choice the Club offers as to where and when I go on holiday."

The Hideaways Club, has 20 luxurious,  million plus properties throughout Europe, Africa, Mauritius and the Far East with more planned to be added to the portfolio during this year. The club is an equity destination club, or in Europe is referred to as a fractional club, and members have equity ownership in the entire portfolio of properties that offers potential for medium to long term growth on their investment.

Having a celebrity or sports star as a club Ambassador or spokesperson is becoming increasingly popular amongst the destination clubs. Distinctive Holiday Homes recently announced Scott Dixon, winner of the 2008 Indianapolis 500, had become Ambassador for, and a member of, the club. Ultimate Escapes numbers several sports personalities amongst its members including Denver Nuggets Coach George Karl and Hall of Fame Quarterback Steve Young. Jack Nicklaus has a partnership with Exclusive Resorts and helps with their golf program including events, tournaments and clinics.