Portsmouth, NH-based PlaneSense, an aircraft fractional ownership program, has recently celebrated some major business milestones. The privately-held company has not only surpassed 200,000 flights, on August 7th, 2013, they took delivery of their 49th Pilatus PC-12 from Switzerland-based Pilatus Aircraft Ltd. Delivery was made in a ceremony hosted by CEO George Antoniadis. The fleet of PC-12s owned by PlaneSense represents the largest fleet of civilian owned PC-12s in the world, and PlaneSense is the largest civilian operator of their type. Pilatus has now built 1,200 of the aircraft. 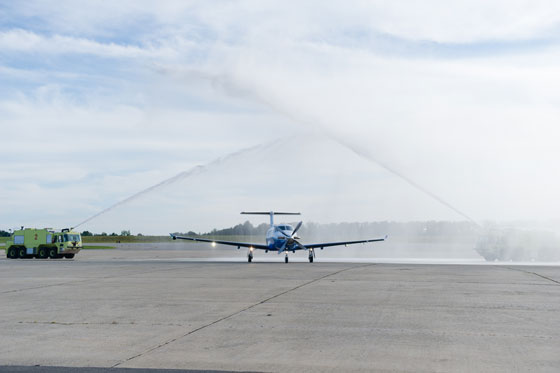 PlaneSense flies the PC-12 aircraft exclusively and cites high performance and fuel efficiency as two of the major benefits. With their highly-regarded maintenance affiliate Atlas Aircraft Center Inc. co-located with them in New Hampshire, along with dedicated pilots, they offer high residual values for owners' shares. With this latest PC-12 delivery, PlaneSense now has 30 aircraft in their fleet (after retirements and replacements over the years), and approximately 300 owners. According to President and CEO of PlaneSense, Inc., George Antoniadis, "Our mission is to serve our clients safely, courteously and punctually. In a time when many question the viability of the fractional aircraft industry, particularly in light of recent events with Avantair, we have proven once again that the PlaneSense team is stable, robust, and ready to serve our clients with excellence while breaking records!"

PlaneSense has also reported a record number of owner flights up and down the Eastern Seaboard and into the Midwest, reflecting a 14% increase over the the average number from the past few years. PlaneShare offers fractional ownership shares to their clients, and the majority of their estimated 300 owners have a 1/16 share. Contracts run for five years, and owners can renew after 5 years without a capital investment. Based out of Portsmouth, New Hampshire, PlaneSense has been in operation since 1996 and has partnered with Pilatus for almost 20 years. They are governed through Federal Aviation Regulations Part 91, Subpart K.