A federal judge has signed an order for the Chapter 7 bankruptcy of troubled fractional operator Avantair. Meanwhile its fleet of Piaggio P180s has been grounded since June. Here's a summary of the background. 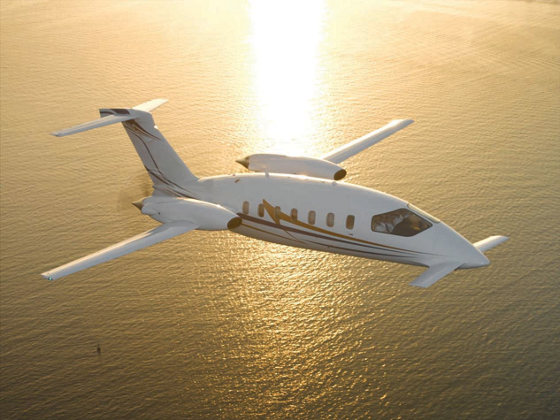 Avantair, was founded in July 2003 and became the only publicly listed fractional aircraft operator, trading under the stock symbol AAIR. It was also the only US based fractional operator of the innovative Piaggio P180 Avanti (pictured above), a twin engine pusher configuration turboprop. The public listing meant Avantairs financials were available to all and they never showed a very pretty picture. The company has been consistently loss making during its ten year history, with a total accumulated deficit of $122m on its balance sheet at March 2013.

Part of the appeal for customers was the lower prices in operating a turbo-prop compared to a jet. The P180 offers speeds significantly higher than other turbo-props, even beating some jets, and yet was up to 40% more fuel efficient than market-competing jets. Back in 2007 we reported pricing for a "1/16 share (= 50 hours) for $415,000 plus a monthly management fee of $8,900 with no hourly operating fee."

Other fractional aircraft companies typically charge $1,500-$2,000 for their occupied hourly rate, rather than the zero from Avantair. Part of the problem was that the company seems to have simply not charged enough. In a letter to owners in June this year the company indicated its pricing was too low saying "Our business model assumed efficiencies that never materialized and a pricing schedule based on those efficiencies."

While finance and pricing was part of the problem, the issue that really caused the company to fail was operational. The company grounded its entire fleet for three weeks in the fall of 2012. According to the FAA this was due to "at least in part because of problems accurately tracking the time in service of life limited parts, and because of the questionable reliability of its maintenance record keeping system."

In November last year, after the fleet grounding, the company hired a former FAA executive as the SVP Safety, Quality and Compliance - so hoping to solve its problems with dedicated senior staff.

Their fleet was back in operation earlier this year. But further problems in June caused the fleet to be grounded again and the company furloughed pilots and other employees. Rumors abound that the company only had a few airworthy aircraft, out of its 57 aircraft fleet. Similar to their prior comments, the FAA stated this grounding was due to "at least in part because of AvantAir's problems in accurately and reliably tracking the time in service of life limited parts, and problems in transferring accurate time in service records for parts "cannibalized" from some Piaggio P-180 aircraft to other Piaggio P-180 aircraft in AvantAir's fleet." This apparently led to owners and card holders facing delays, short-notice cancellations and flights that failed to materialize

The company is now facing a variety of legal issues. It received notice of service of a class action lawsuit by fractional owners - clearly if the aircraft you own a share of is not in the skies you are going to take issue. It also faces action from an aircraft leasing company, when it fell behind on lease payments for part of its fleet. Former employees have also filed suits claiming labor-law violations.

In July both the President and the CFO resigned, along with a board member.

While other private aviation companies faced a down turn during the recession they have all grown significantly since then and have returned to profitability. Avantair was always lower priced than it's larger competitors, that was partly becuase it operated a turboprop, which is cheaper to run, but it appears that Avantair just priced things too low and never saw the economies of scale that it expected. Combine this with the operational issue, where customers were not getting the planes they wanted when they wanted them and the writing was on the wall.