PlaneSense Operations - An Inside Look

PlaneSense is headquartered at Portsmouth International Airport, about a mile from central Portsmouth, NH. The airport was originally the Pease Air Force Base, but now sees both civil and military use, with the New Hampshire Air National Guard also operating out of the airport. Given its military past the airport has a long 11,322 ft (over 2.1 mile) runway which even acted as a backup landing site for the NASA Space Shuttle.

The length of the runway is a little ironic for PlaneSense, given that their Pilatus aircraft are renowned for getting into and out of very short and even unpaved, grass, gravel or dirt airfields.

Founder, President and CEO George Antoniadis placed his first order for a Pilatus PC-12 single engine turboprop in 1995. This aircraft model has continued to be the mainstay of the fleet, with PlaneSense growing to be the largest civilian operator of what is now an iconic plane.

When Pilatus announced their new PC-24 jet, PlaneSense became the launch customer, taking delivery of the world’s first PC-24 in February 2018. Overall, there are about 50 Pilatus turboprops and jets in the fractional fleet today.

The PlaneSense Flight Operations Center (FOC) is the control room for all the aircraft flight activities. This part of the PlaneSense team schedules flights for the fractional share owners, and matches aircraft and pilots to meet these flight requirements.

The group coordinates about 100 owner flights on a typical day, with additional repositioning flights to make sure an aircraft and crew are in the right place to complete each set of owner missions. One flight crew we talked to had seven flights lined up for the day, with a mix of owner flights and repositioning flights to pick up owners – so a lot of short hops. The average owner leg across the whole fleet is 1.12 hours – in other words, just a few hundred miles.

In pre-covid days the FOC looked like a small-scale NASA type control room, with lots of people and lots of screens, tracking lots of flights. On the day we visited, in a post covid world, where people have learned to work from home, it was much quieter, with some employees in the FOC, and many more at their home offices.

David Verani, Vice President of Sales and Marketing noted that one of the things that PlaneSense likes to tell customers is “We get you closer,” meaning that the Pilatus aircraft can access much shorter runways than planes in other fractional programs. David Medlock, Director of the Flight Operations Center backed this up by noting for instance that they fly onto some islands and keys that other aircraft can’t get into. On the weekend after we visited, PlaneSense had 20 flights scheduled into islands in the Bahamas, which is a very common destination for them.

While domestic US flights make up the core of the mission numbers, international trips are very common. As noted above the Bahamas and other Caribbean islands are frequent destinations, flights to Canada “are almost daily” said David Medlock and there are multiple trips to Mexico and Central American countries such as Costa Rica and Honduras.

As part of all the scheduling, the FOC team takes account of a range of factors about the pilots and the planes. For instance, the FAA sets out flight time limitations and rest requirements for pilots and copilots, and for any night time flights, ensures that the pilot in command (PIC) is appropriately qualified. They are also looking at scheduled maintenance intervals for the planes and for instance if a requested airport destination is accessible or maybe has night time curfews. These, and many, many more items, go into matching pilots and planes to owner requested missions.

When a new pilot joins the company, their training all starts in house at the company facilities in Portsmouth. Eric Cannon, Director of Training, provided a tour of all the training facilities and classrooms. With the large growth in the fleet and flight numbers over the last year or so, Eric’s group has been running new hire classes every week, in addition to ongoing training and additional training for pilots upgrading their skills.

PlaneSense have developed their own training programs, which go a long way over and above the levels required by the FARs (Federal Aviation Regulations) or by Pilatus.

New hires, who all join with many hours of flying experience, spend 18 days in ground training at Portsmouth, including time on the light simulator shown in the image below. 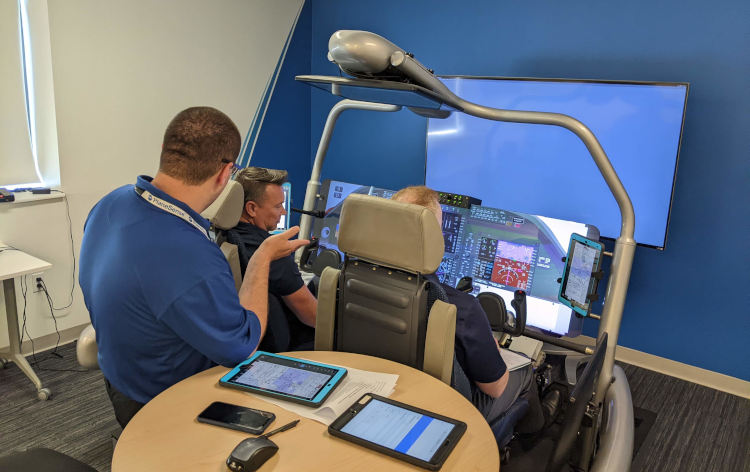 Captains then go out to Flight Safety International’s Simulator Training Center in Dallas, Texas for 9 days of full motion simulator training with the final check ride in a PC-12NG Level D simulator on day 9. This training is also run by PlaneSense staff.

The people doing the training are also pilots and have a dual role – flying for half a month and training for half a month. “They bring all that real world experience to the training” said Eric Cannon, and continued “after new hires have passed their checks we put them out with instructors on the line, so a new captain or new first officer, for their first cycle or so, will be paired up with a seasoned instructor.”

PlaneSense have some of their aircraft designated as core training aircraft based in Portsmouth. The pilot and the instructor will go out in one of these planes and be given a mission to fly, without any owners onboard. The company uses specific airports that “are high value for training”, and the pilot and instructor will spend a few days flying into the little airports around New England. The size of these airports certainly sound like they test the pilots’ skills for getting into smaller locations, with some of these airports only having grass landing strips.

Some of the local airports that the training pilots fly into include:

“Pilots love it because they have the flexibility to train without being tied to the operating schedule,” said Eric Cannon. Once the pilots are fully trained, they do a check flight every 6 months and full training annually.

All maintenance of the PlaneSense fleet is overseen by Atlas Aircraft Center, a sister company of PlaneSense. Atlas is both a Pilatus authorized fleet service and support center and an FAA certified Part 145 repair station. Most of the maintenance happens right in the hangar at the company offices in Portsmouth or at the newer repair station in Boulder City, NV.

Here’s a view of the Portsmouth maintenance hangar on the day we toured the facility: 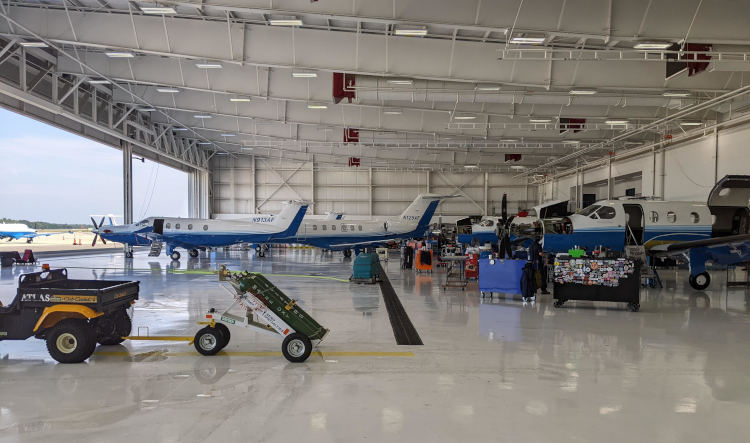 PlaneSense likes to note that it has received the FAA Diamond Award for Excellence every year since 2002. And for many years has also received the Avionics Training Excellence Award from the Aircraft Electronics Association (AEA).

The Owner Services group at PlaneSense makes sure that travel goes smoothly and exceeds the owners’ requirements. The aircraft have standard snacks and drinks onboard, but PlaneSense will arrange any custom requests from clients, this may include anything from a bottle of champagne for a special occasion, or simply peanut butter sandwiches for the kids on the trip.

Danielle McPheters, Director of Account Services noted that certain clients have specific wine requests and at some of the more remote airports that PlaneSense fly in to, these can be hard to fulfill. On occasions, this has meant that the PlaneSense pilots have even rented cars to drive to the nearest wine store, to buy the appropriate wine selections.

PlaneSense staff will also arrange ground transportation if the owner requests this, but Danielle noted that while this happens, it’s not tremendously requested, for instance if an owner is flying to and from their vacation home, they often already have a car at either end.

Several PlaneSense owners rely on the company to transport their children to school or to summer camp, and there’s always an increase in these flights as school semesters or summer camps start and end. These types of flights require additional attention in terms of having the paperwork to authorize children flying on their own, without parents or guardians. Since PlaneSense started in the mid 1990’s they have even seen a generation change, where kids that flew early on, are now owners themselves and have their own kids flying.

But it’s not just people that fly with PlaneSense. The large cargo doors on both the PC-12 and the PC-24 means there is a lot of room for luggage. Pilatus likes to say they can get a full-size pallet through the cargo door. Danielle McPheters recounted the story of an owner who used their plane to fly a replacement piece of factory equipment direct to the site, which saved the factory a week of downtime, compared to shipping the piece by road.

Danielle noted that many of her interactions with owners are “a lot of old fashioned pick up the phone” and George Antoniadis really summed things up noting “it’s still a very personalized service.”