Fractional Ownership of the Learjet 85 from Flexjet 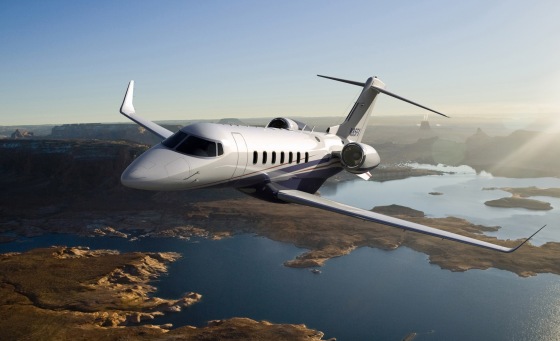 To ensure new and current owners a seamless transition to the Learjet 85 (pictured above) aircraft upon its anticipated delivery in 2013, Flexjet is offering guaranteed access and availability to its fractional jet ownership fleet of Bombardier aircraft—the youngest in the industry with an average age of approximately four years. As an added benefit for existing owners who place a deposit on a Learjet 85 aircraft fractional share, Flexjet will waive early termination fees for existing contracts on other aircraft types that will not expire until after the delivery of the Learjet 85 aircraft.

"Flexjet is thrilled to offer its owners the first opportunity to experience private aviation at its very best aboard the all-new Learjet 85 aircraft," said Fred Reid, President, Flexjet. "Designed to fly farther than any Learjet aircraft ever built, this new aircraft lives up to its legendary lineage while setting a new standard for passenger comfort."

The composite structures of the Learjet 85 aircraft enhance passenger comfort through the use of complex curves in the aircraft cross-section and thinner wall thickness to maximize cabin volume, creating the largest Learjet aircraft ever designed. Responsible for not only improving performance and minimizing drag through smoother aerodynamics, the airframe, made mostly of composite material, requires less maintenance and is easier to repair for an extended service life. Other innovations include the aircraft's state-of-the-art Pratt & Whitney Canada PW307B turbofan engine, the Rockwell Collins Pro Line Fusion avionics suite—one of the most advanced flight displays ever offered onboard a midsize aircraft—and an advanced entertainment and wireless Internet system.

The Learjet 85 aircraft is capable of accommodating eight passengers in a traditional double-club seating arrangement. With approximately 30 inches (76.2 cm) between each seat, passengers enjoy more room when traveling on long distance flights. The aircraft offers a high-speed cruise of Mach 0.82 and a transcontinental range of up to 3,000 nautical miles (5,556 km), making the Learjet 85 aircraft the fastest and most efficient aircraft in its class.

The pricing for a 1/16 share, equivalent to 50 hours of flight time a year over a 5 year year agreement, starts at just over $1,000,000. The company says it has so far sold over 30 fractional interests in the Learjet 85.