JetSuite Offers an Economical Cabin in the Sky

Appealing to those clients who value both their time and money, private jet charter company, JetSuite, is pioneering a new class of service. "We're attempting to make private charters more affordable and accessible," says Keith Rabin, president. The provider offers the same level of luxury as other branded operators. 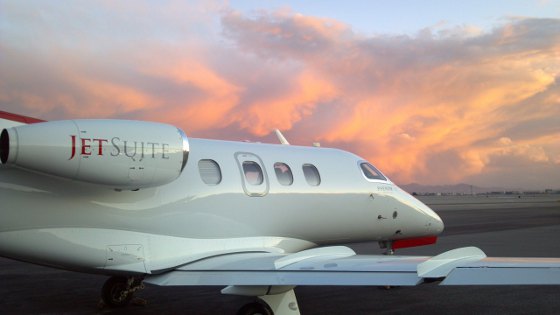 How are they able to do this? For one, JetSuite only operates Phenom 100 aircraft. "[This aircraft], built by Embraer, is a very reliable model for this market," Rabin notes. "It's also efficient—using half of the fuel of our competitors' comparable aircraft."

Accommodating four passengers comfortably, these aircraft feature a wider and taller cabin with larger windows than similarly sized jets. They also offer a lavatory as well as state-of-the-art technologies including Bose noise-cancelling headphones, XM satellite radio as well as 120-volt outlets for laptop or other media use. "Designed by BMW, the cabins are very luxurious and comfortable," Rabin says.

Because JetSuite pilots only operate Phenom 100 aircraft, they are able to become very well versed in the operation of these aircraft which assures a high level of safety. In addition, according to its website, JetSuite's pilots, "are among the most experienced and well trained in the charter industry, averaging over 8,000 hours of flight time." Its pilots are also required to annually train at CAE Simuflite using full-motion Phenom 100 flight simulators.

JetSuite is also the only Part 135 operator to provide Garmin Synthetic Vision Technology in every aircraft. "It's like a GPS system that offers a visual map for pilots in case visibility is hindered by weather or other factors," Rabin says. "It gives them a virtual representation of what's ahead of the aircraft."

Using an airline-grade safety management system, all JetSuite flights are analyzed to ensure safe operation through data collection. From that information, the provider's safety office issues findings and recommends corrective action. Through these efforts, the company has achieved ARG/US status as a Platinum level operator.

The company began serving the Western United States in 2009, "We have many clients who travel around California as well as to Nevada," Rabin claims. "It's not unusual for clients to fly, say, from Los Angeles to San Francisco, or Las Vegas." Having recently began offering its services in Texas as well as the Northeastern U.S., JetSuite is seeing growth in those areas, as well. "We've launched an operation in Texas as well as in the Northeast to accommodate those clients."

Rabin says that while the flight costs are a little more than flying commercially, JetSuite's services save, in many cases, half the time. For example, he says, "if you want to fly from Orange County, Calif., to Las Vegas, by the time you park your car, arrive at least an hour before departure to go through security lines, taxi after landing, wait to get off the plane, get your luggage and get car service, you'll probably spend about 3 hours total in travel time."

In contrast, Rabin says, JetSuite will arrange ground transportation, handle your luggage and help you avoid security lines. Then, you can just board the plane and be on your way. He says that the cost of a JetSuite flight for four for this journey, round trip, is about $1500 per person. However, he adds that your travel time will be cut in half. In addition, the flight crew will provide drinks and snacks, and you get to relax in the comfort of a private plane.

Yet much of JetSuite's success can be attributed to its flight crews, Rabin asserts. "We're able to provide a great balance of having professional and personable people on our staff," he says. "They understand that some business travelers may want a high level of professionalism while some leisure travelers may want a more relaxed, personal approach." In addition, he claims that JetSuite crews have rushed to return briefcases, computers and cell phones that were inadvertently left on the aircraft. In one instance, a child traveling with her family had lost a favorite stuffed toy during a trip. "The flight crew purchased a replacement toy and had it waiting on plane for the family's return flight home," Rabin boasts. "We're very focused on finding people who understand the importance of good service."

JetSuite offers cost-saving programs to its clients. One is through SuiteKey Membership. Operating much like a jet card, this membership requires a minimum deposit of $50,000 which the member can increase to $200,000. These funds, which never expire, can then be used towards flights. In addition to such benefits as a higher priority for booking flights, more flexible change and cancellation policies, lower FBO change fee and free ground transportation booking services, the hourly flight costs are reduced. For example, a $50,000 membership level costs $3,150 per planned flight hour. The $100,000 membership level reduces the hourly cost to $3,050; the $200,000 membership reduces the hourly cost to $2,950.

Another product offering is SuiteSavers. In an effort to optimize its operations, JetSuite offers reduced flight rates on slower travel days. For example, on Friday evenings, several parties may be traveling to Las Vegas, but few parties are returning to Los Angeles. Clients can take advantage of these flights by booking them in advance. With the typical cost of flying four people one way over this distance is about $6,000, SuiteSaver rates can be as low as $1,499. Another product offering is SuiteDeals. These last-minute flights are listed on the company's Facebook and Twitter pages.