The new fractional jet provider has been expanding quickly since it launched last year. SherpaReport spoke to founder and CEO Matt Liotta about the rapidly growing company and plans for the future.

Matt Liotta is a serial entrepreneur and has been flying privately for many years. He described how in his last business he had needed to go to a lot of inaccessible places, so private aviation was a natural option to help him get to these locations. (editorial note – commercial aviation in the US serves about 500 airports, but there are over 5,000 airports that are accessible by private planes, so you can often get closer to your final destination by flying privately.)

But his challenge was that there were usually just 1 or 2 people traveling on these trips, so he felt it was hard to justify the private flights, even when they flew on a light jet, which usually has seating for 6 passengers. He says this experience started him thinking about creating a more efficient offering.

On top of this he says he subsequently found out that 70% of private aviation missions are for less than 4 passengers, and that for most private flights the average mission is under 1.5 hours.

Putting all this together started his search for an aircraft that is more efficient in meeting these needs, and this led him to the HondaJet.

Volato currently has 10 HondaJets in their fleet with 15 more on order, and the expectation is that the bulk of these will be delivered in 2023, with the order completed in 2024. Matt Liotta says he plans to place new orders, for more planes, well before then.

The HondaJet Elite S, the latest version, has a range of about 1,400nm, 66 cu.ft. of luggage space (enough for over 9 full-sized suitcases, or 6 sets of golf clubs), and Volato has them configured with 4 executive leather seats in a club configuration. The cabins also have a full galley and a fully enclosed lavatory.

Matt states the planes have more leg room and are quieter than the popular Phenom 300 – the plane he used to fly with his prior fractional provider.

The Volato fractional jet program has a fairly standard structure, with shares available in 1/16, 1/8, ¼, ½ or whole ownership, over a five-year agreement. Like traditional fractional programs, the 1/16 share represents 50 hours of use per year, so overall a full plane would be planned to do 800 hours of fractional flying. But there’s an interesting unique twist.

“As a former user (of fractional) I had issues with the structure,” says Matt “if my usage was low, I felt pressure to use it, and if it was high then I had to buy more time or pull forward hours. It was hard to anticipate usage for five years.”

“Owners can fly as much or as little as they want, regardless of share size,” says Matt, then adds “when I talk to owners, some feel that they never pay a management fee, since they often net out with the revenue share.”

One of the reasons this structure works, is because Volato also makes the planes available for charter. So, owners receive their proportionate rebate on both owner flights and charter flights. The further ahead that owners plan their own flights, the more time that Volato has to find paying charter customers and the better the opportunity to earn revenue and revenue share for the owners.

“Once people get it (the revenue share) they really appreciate the freedom of not having to worry about hours,” comments Matt. 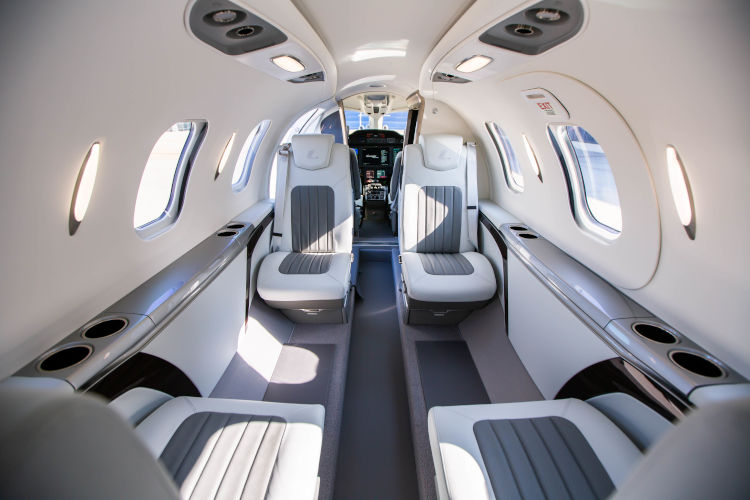 The current pricing starts at $420,000 for a 1/16 share. This is up significantly from the price at launch, less than a year ago, when a 1/16 was priced at $350,000. The record demand for private aviation is causing large increases across the board and Matt noted that the price of the HondaJet had increased by about $1m in the last year.

The 1/16 share is priced at a relative premium, since Volato wants to encourage owners to buy larger shares. There is also a monthly management fee of a few thousand dollars, which also goes up by share size.

The hourly usage is just charged wheels up to wheels down with no charge for taxiing, whereas most programs charge 6 minutes on either end for taxi time. Fuel is charged at cost - from “engine start to stop” – and the plane typically uses about 90 – 100 gallons an hour.

Matt Liotta says he’s seeing three principal kinds of customers for the fractional jet program:
1. From other fractional programs - eg they had 1/8th in a Phenom 300 - and are now buying 1/8th with Volato,
2. Those who couldn’t afford jets before - eg maybe they were in turboprops or couldn’t afford private at all - so now they are in the HondaJet,
3. Those who see a business opportunity, and buy a bigger share than they use and get subsidized with the revenue share.

Volato has been rapidly expanding its base locations and now has six, consisting of Atlanta, Baltimore, Ft. Lauderdale, Houston, San Diego and St. Augustine. In the fractional program, there is no repositioning fee for flights within 2 hours of one of these bases.

The ultimate aim is to cover the whole country, and have no repositioing fees nationwide, and the company expects the next three locations to be in the North East, North West and Mid West. Earlier this year Volato acquired Houston based aircraft management company Gulf Coast Aviation, which added more charter aircraft and also managed aircraft to the company.