Reviews and travel stories from members of the Quintess Collection

A Trip to Buenos Aires, Argentina

With Quintess Beyond, we visited Buenos Aires to see my daughter, who is studying abroad there. Although the dates at Recoleta Refined were not originally available during the weekend we wanted to go, someone pulled the strings to make it happen.

A Private Chef in Tuscany

Five of us girls spent two weeks in Italy to celebrate several of us turning 50. We stopped in Rome, Florence, Capri, Venice and Tuscany. And of course with this group, we wanted to see everything we could, do everything we could and eat gelato every chance we got!

This past February, my husband and I had the extraordinary opportunity to visit Magdalena Bay for a once-in-a-lifetime whale experience. Although we've been to Los Cabos several times, and have enjoyed seeing whales in a variety of circumstances, we had certainly never experienced anything like this before.

We stayed at the Quintess Colibri villa in Saint Martin at the end of January. We loved the people we were with, the home, the beach, and the level of service provided by La Samanna and our charming Host. It just doesn't get any better than this! 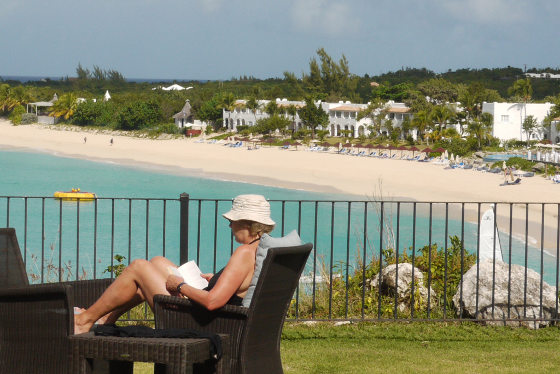 Plus, the gym, tennis courts and boutiques are all just a short distance away and the villa is wonderful, with a fantastic entertaining area and a large yard with an amazing view. Our daughter became engaged shortly before we left for the trip, so we kept looking at the yard with the breathtaking view of the bay and the island grasses thinking it would be a great place for an intimate destination wedding. We so enjoyed spending time with our friends, taking in the views and laughing at the friendly iguanas lounging on the rocks that we didn't feel the need to go too far. There's nothing quite like waking up by the ocean, walking down to find a great spot on your own private beach and then spending the day snorkeling, swimming or just walking in the sand. Whereas when you go on a safari, you want to wake up every day and see new things, Saint Martin is the kind of place that you can just relax for the whole trip. What a getaway.

One day we took a trip to Pinel Island, which was lovely. We had a fantastic lunch at a restaurant on the island and then we spent the day snorkeling in the quiet waters. We would love to do that again. We also ventured out to the French side of the island, where we discovered exceptional restaurants, including the feet-in-the-sand La Cigale, where we dined twice. One evening we made the short journey out to Grand Case, a Creole village by the sea that features a street market on Tuesday nights, called Mardis de Grand Case. The atmosphere there is a lot of fun – it's a festival of sorts, with a parade and cars parked for miles out of town. We arrived around 5:00 p.m., walked around for an hour, had dinner, and then departed before the traffic got too crazy. It was a great time. 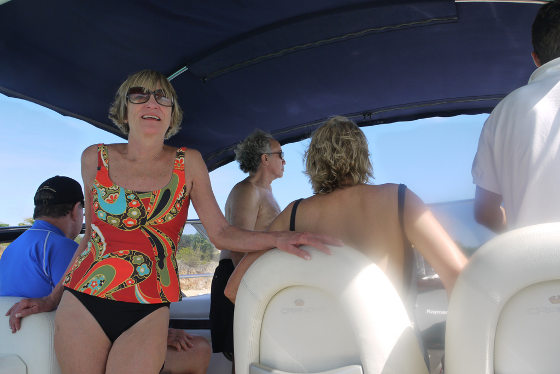 During our trip, we saw an enormous yacht in the bay and then later a helicopter hovering very close to the yacht. Then we saw skidoos speeding across the bay as if they were racing, again and again. After speculating about which celebrity yacht it might be (Kate Middleton and her family were rumored to be vacationing in the Caribbean), we asked a few locals, who revealed that they may have been filming a new James Bond film in Saint Martin waters. Though we couldn't confirm the reports, it was exciting to be close to the action.

Also, I just have to share, last February we took a family trip to Los Cabos, Mexico. There were fourteen of us, including six grandchildren, and we stayed for five nights in two Cielos homes that were just one house apart from one another. Everyone had the time of their lives. Our daughter, who's getting a PhD in comparative literature and speaks Spanish like a native, was totally in her element and two of our grandchildren, who were each three years old at the time, found their new Cabo home to be so comfortable that they flat out refused to leave at the end of the trip. The two seven-year-old grandchildren were slightly more sophisticated, presenting a list of reasons why we should never leave Los Cabos. I know we're all looking forward to returning to Cielos Palmillas in February of 2013, when we'll celebrate the joyous event of our daughter's wedding.

Summer in Tuscany With a Private Chef

Pamela and I joined Quintess in hopes of traveling to great destinations and experiencing one-of-a-kind vacations. Quintess has certainly afforded us that. Being Members of the Club has given us extra incentive to vacation every year, and over the years, we've taken amazing trips that we never would have otherwise. Best of all, we've come away with priceless family memories from each and every journey.

Plenty of Space for Two Families

I first learned about The Quintess Collection through our good family friends, the Harrises. For the past four winters, we accompanied them to the Quintess homes in Deer Valley, which is an ideal ski destination for us because our kids' schoolmates go there as well, so we can plan to see each other, have dinners together and spend time as a group. Plus, Park City is really easy to get to – just a short flight from where we live.

Jackets Required at The French Laundry

We joined Quintess because of the service and caring that's a core of the relationship. Like most Quintess Members, we are busy people juggling too many things in our lives, and although leisure is an important part of our lives, we often just don't have time for it. Quintess helps us make time.

Our conversation finds me standing in one of the New York City penthouses overlooking Times Square the week before Christmas. This place rocks! I could not imagine choosing a better view or location if we had the pick of the city. The Broadway show 'Book of Mormon' is fantastic and just half a block away; Blue Ribbon Restaurants, our favorite, is within walking distance; Rockefeller Center, the Rockettes and shopping are all easily accessible by foot. This is the perfect recipe to create lasting memories and it all started with a Wish.

We originally joined Quintess as an alternative to second home ownership; we wanted the broadest range of properties possible. For this reason, Collection Access was important to us from the beginning.

We originally joined The Quintess Collection because, as our parents get older, we want to take advantage of being with them while they are still able to travel. Plus, with a brother in Hawaii and two young daughters, we need a place with plenty of space and availability for family trips. The Quintess homes are great for when everyone joins us; however, when it's just the four of us, then DUO is just right. We love staying at The Ritz-Carlton and would love to go to Vail and stay at The Ritz-Carlton DUO properties. This year our daughters are taking ski lessons, and so we'll soon be ready to take advantage of some of The Collection's outstanding mountain destinations!

Last year I used THE TOUR CLUB to organize and send a group of eight to the 2011 Masters tournament. Each of the eight guests represented an important corporate relationship, and going to the Masters with THE TOUR CLUB helped ice the cake with these guys, so to speak.

The yoga retreat was outstanding. It was truly magical and perfect in each and every way. I hope Quintess continues to offer the Cabo yoga retreat, as I would book it yearly.

We hosted family members for a week in Naples, and like at other Quintess homes, we wanted to have an in-home chef for a relaxing night and Chef David was the perfect fit for our crew.

It is my secret ambition (though now you know) to bring my wife and four daughters to every continent before my oldest graduates from high school. I have two years, and now that we just returned from Africa, only two more continents to go: Asia and Australia.

Thanks to Quintess and the wonderful services that the club provides, my family and friends enjoyed a very memorable March in Tuscany.