Former San Francisco 49ers Quarterback and NFL Hall of Famer Steve Young has been a member of Ultimate Escapes since 2005. He recently sat down with Rich Keith, Chairman of Ultimate Escapes and talked about what membership means for himself and his family. 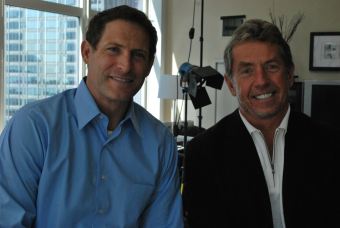 The two met in one of the clubs two penthouses at 1600 Broadway in New York City, overlooking Times Square.

SY: "Well, I think you know, I think you want to talk to others that have had this experience, me being one of them and that's why I'm willing to do this. My experience has been pretty flawless I have to be honest with you, and we do put you to the test because we come and go very quickly and we don't plan things out 6 months. It's helpful for you and everyone when you can, but we're short term, ......... you really work with me, and we turn things vey quickly.

We move with our family and young kids and we have adults and other groups and friends, and so it's just the accomodations continually are being tested, by just different ways that I'd do that.

I'd be the perfect guy to see the breadth and width of what you guys can do, and I'm grateful. I think you take it as a challenge and it's something you enjoy meeting, and I would say I have enjoyed over the last 3 years, being one of those guys that doesn't mean to be such a challenge, ends up being that way. And it's fun to see that you've met that in spades, including this trip as we sit here right now today."

RK: "This is a good example, because you had a lot of moving parts to this trip."

SY: "To do it and walk in and have the visitors, the people that we're bringing and saying, come to New York we really want to show you a good time. The host brings us up, we go to the corner (of the apartment) and take a look at Times Square. ..... that's the experience."

In earlier comments Steve Young had said We debated between buying another vacation home but this option was far too limiting  my family wants to travel where they want, when they want." This is a common reason for joining a destination club compared to buying a vaction home. Ultimate Escapes told us Steve Young has taken family vacations in Paris, London, Punta Cana, Hawaii and the Bahamas with the club.