Staying in London with Quintess LRW

In the 18th century the English writer and poet Samuel Johnson said .. when a man is tired of London, he is tired of life; for there is in London all that life can afford. Taking these words to heart SherpaReport went to London last week, and stayed for a few days at one of the Quintess homes in the city. 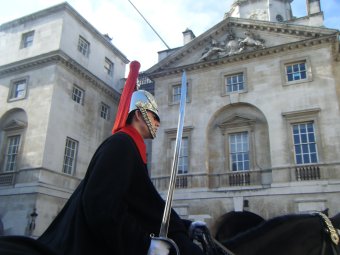 Life Guard London
I was travelling to the UK for a week and with it being a school vacation week my three kids came along to meet up with their grandparents who live over in the UK. Even though we were travelling during a prime week (Presidents week in the US), Quintess had availability at both of its London apartments when I talked to them just a few weeks beforehand.

These two apartments are just two doors away from each other on St James Street, right in the heart of London. While they are very similar in size, they each have a different feel. The one we stayed in is called the Palace View Penthouse  although interestingly the other apartment has the slightly better view of the Palace  and has a modern contemporary décor throughout. The other has a more traditional English décor. Both are over 1,500 sq ft, with two bedrooms, two and half bathrooms and an office.

The Palace View Penthouse occupies the top three floors of a six storey building, and has its own private elevator. The first floor has the two bedrooms, the next floor has the spacious eat in kitchen/dining room and the living room. The top floor is the really fun part. Its a bright, airy office, with a small private rooftop terrace. It also has the top of the elevator shaft, which is a raised platform about 3 feet off the ground, covered with a huge pillow or cushion  effectively making a day bed. The kids vied with each other as to who should have this prime sleeping spot, and eventually agreed on a rota system to have this as a bed for the night. 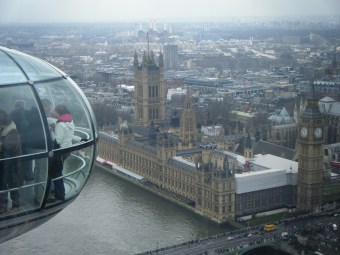 Houses of Parliament from the London Eye
While we didnt make much use of the terrace area  after all this was London in February  I could well imagine sitting out there in the summer. It would be the perfect place to sit with a cup of tea or coffee in the morning or sip a relaxing cocktail in the afternoon or evening. The view down St James St lets you watch the Guards marching up and down outside St James Palace, less than 100 yards away.

With 3 adults and 3 kids in our party we had plenty of room. Quintess supplied inflatable beds for the kids, and as London apartments go, the Quintess ones are the most spacious amongst the destination clubs. They are also, in my opinion, the best located London apartments compared to the other destination clubs  not that there is a whole lot to choose between the locations, but Quintess certainly has the edge.

To highlight the location, we either walked or could have walked to all the following places from the apartment:

Other places that are just a few tube stops or a short taxi ride away include:

In organizing our trip, I had already booked our flights over to the UK, but Quintess staff were available to help us with any other aspects of the trip  just like they would for a Quintess member trip.

I emailed back and forth quite a bit with Ronan, the London based Destination Host for Quintess. We covered our plans for the trip and he offered all sorts of suggestions and advice and was available to book any restaurants, shows or other events. Ill add I used to live in London for several years, so know the city fairly well and had a good idea of what we wanted to do. Even so it was great to have local, up to date knowledge. The day we arrived, Ronan met us at the apartment and had stocked the apartment with the groceries wed ordered and had our tickets ready for the London Eye, together with a map of the immediate neighborhood. He also recommended a café close to the Eye where we stopped for breakfast.

St James Palace Entrance & Guards
Before we arrived he had sent me a custom itinerary based on our emails back and forth and had also sent over the Quintess 40-page Planning Guide for London, full of advice, tips and recommendations for a visit to London. We also followed his recommendations on a local place for dinner, and ended up eating there twice. Throughout the trip I had his cell phone number for any thing that might have cropped up  always useful for those unscheduled events. Plus, for instance, while we were there he sent an impromptu email about a special event that he had just come across that he thought the kids might enjoy. While we didnt rely on Ronan as much as a new visitor to London might, he was still incredibly helpful and saved us a lot of time. Put another way in the simple words of one of my daughters I like that guy, he does stuff for us.

And just in case youre wondering, despite all the arrays of things to do and see in London, my 7 year old sons favorite activity was feeding the pigeons, ducks, swans and pelicans in St James Park. His two older sisters voted the London Eye as their favorite.