Off-Season in Los Cabos Mexico can be amazing - quiet, peaceful, spacious, un-crowded. But because it's off-season, with all the dicey weather and other challenges that accompany it, you just have to be a bit more flexible. 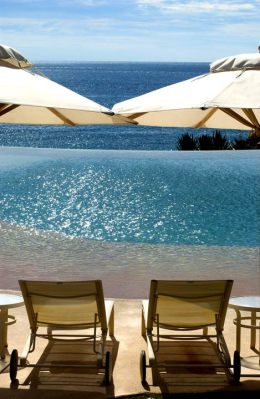 Ultimate Escapes Cabo Home
I expected the heat, a few closed businesses, and some maintenance work. I honestly did not expect a hurricane (although it's the season for them). But one did hit the area shortly after we returned to the States. You might think we dodged a bullet, but the fact of the matter is that if you are a member of a luxury destination club, even a hurricane can have very little effect on your vacation.

That's because the staff for these luxury clubs are fully prepared for the inclement weather. I was staying in a large, beautiful Spanish-style home owned by Ultimate Escapes, which has a total of 22 properties available in Cabo. They have the off-season completely covered with extensive preparations. Once the local hosts heard that Jimena was on the way, they began monitoring the three warning levels. The first level came within 48 to 72 hours and alerted members that the hurricane was approaching Baja. The second came within 24 to 48 hours, and at that time the staff moved to put in protections that included attaching shutters, storing patio and other outdoor furniture, and in some cases applying plywood to windows and entrances. This destination club also helps its members by bringing them water, canned food, batteries and electric generators if they choose to stay on. They also help members leave the area - they will book last minute flights and even drive them to the airport.

The third warning alerts members to stay indoors, monitor the radio for updates, and not leave the property. This last instruction is in place because streets could be blocked by water or landslides, or objects could be flying about. We later learned that Casa del Sol -- the villa we had stayed in - suffered very little damage. In fact it was non-existent: some of the plants lost some leaves which ended up in the pool and Jacuzzi. Another couple who stayed on longer ended up cutting their vacation by one day. But the truth of the matter is that if you belong to a luxury club, even a Category 3 hurricane can pass through with little effect on your vacation. And the rewards of staying off-season abound: great service where every one of your needs is addressed, people who are extremely friendly, housekeepers who will even do your laundry every day, food that is over the top, and miles of stress-free expanses of open ocean and clear pools.

Last year I wrote an article for SherpaReport about my off-season stay in an Ultimate Escape's multi-million dollar home on Abaco island in the Bahamas. This destination also had secluded beaches, wide open spaces and serenity. It was so un-crowded that one day we discovered that we were the only ones on the entire golf course inside the Ritz Carlton Resort. The same could be said for off-season in Cabo - you could basically have an 18-hole course all to yourself. Here is a further glimpse into our Cabo trip: The first night we grilled large salmon steaks poolside at the villa's outdoor bar as the sun dipped below the rugged mountain. The next day we ventured down the mountain to go swimming in the turquoise sea. We drank Dirty Monkeys while standing in the infinity pool at the Sheraton, which has a reciprocal agreement with Ultimate Escapes. Later in the week we headed to Agua Restaurant at Palmilla One&Only, where we were catered to by 5 different waiters giving us a selection of 20 different bottled waters and several courses. We also visited different clubs in San Lucas -- from Sammy Hagar's Cabo Wabo to the popular dance club El Squid Roe. We were off-season in Los Cabos, and in heaven.

Lauren Keyson has been a long time consultant for Ultimate Escapes (www.ultimateescapes.com) and freelance journalist. She has written on travel, personal finance and the business of finance