There have been several rumors swirling about changes at destination club Quintess. Yesterday SherpaReport caught up with Ben Addoms, founder and EVP of Quintess, to discuss the latest developments. 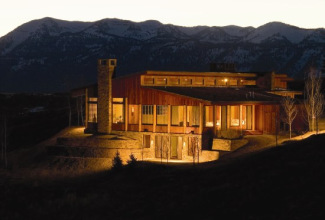 Quintess Jackson Hole
SherpaReport: Ben, I've been hearing about changes that you've made, can you talk through the details

Well, in the current environment we took a step back and created a conservative business plan for 2009 and confirmed this with our investors. We went to our members and said we need to make changes in order to sustain the club in this economy.

This was put to a vote of the members and approximately 96% of members participated and 88% were in favor of the changes. This was a huge vote of confidence in the club.

Part of this change was an above normal dues increase for this year, including introducing a $275 per night occupancy fee.

There have also been staff reductions and we've had to let some good people go. In this economy there's far less need for folks in sales and in real estate positions, so they were some of the areas with the largest headcount reductions. We've right sized and restructured in this economy to make Quintess really rock solid.

We are also having staged reductions in the size of the home portfolio. The portfolio had been built with a certain level of growth expectation and in this environment there are fewer people joining the club, so we don't need as many homes.

A large part of this will be (organic) letting leases terminate (rather than renewing them) and in some of the less popular destinations we will either sell or shutter the homes. Overall the effect will be to reduce the size of the home portfolio by around 15% from about 80 to about 70 homes

As an example the number of homes in Cabo will be reduced from 18 to 14 and in New York City from 9 to 7. The two New York homes are both leased homes that will not be renewed.

This will also have the effect of increasing the owned proportion of the clubs portfolio as well as balancing the portfolio for the current environment. Having said that there are clearly great deals to be had on the property acquisition front and we are still looking at opportunities.

I believe that there will be other clubs that discover they can't operate the way they had been. Clubs need critical mass and if they need investment capital they will have to sort that out. Lusso and High Country are already restructuring. It may be that in 2009 we grow more through acquisition.

New members are still joining the club but this is the first time that the club has had a significant resignation list. Overall this is about being a survivor over the next 6 to 9 months, growth is secondary for the time being but the market will come back.

SherpaReport: What questions are prospective members asking at the moment

They want to understand the long term plan and that the club is going to be there over the longer term, especially since joining a club is a lifestyle changing event.

SherpaReport: What is the status on your Molasses Reef enclave development?

We still have 10 lots on the beach with options. We're waiting for the resort developer to sort out financing for completion of the resort since Lehman had been providing the financing The main hotel at the resort is 85% complete. I expect the delay to be at least a year, but still thinks it's a great location and opportunity for the club. We plan to build five and hold off on the other five.

(SherpaReport note: in the current market the timing may work out well for Quintess)

One other change that Quintess has made, is to make the refundable portion of the member deposit 75%, from it's previous 80%. They still have the offer of refunding 100% in the first year of membership. The only other destination club to have reduced the refundable portion on membership fees to 75% is Exclusive Resorts, which made the change early last year. At the time Brent Handler, President of Exclusive, talked about making the club stronger since this effectively reduces the clubs debt - with the benefit of a little hindsight this is looking like a sound move for the club.

As Ben put it, he learned from his days in "Shop" class at school, where he was taught to "measure twice and cut once". So the club has restructured based on conservative expectations about the future and has locked down member and investor commitments.