Nothing compares to owning a private yacht. But the cost of keeping up the ship's maintenance and crew can greatly outweigh the enjoyment owners get from the limited time they spend on the water. That's why YachtPlus, the London-based fractional ownership super-yacht company, has commissioned ten new Signature Series vessels, designed by the renowned architect Lord Norman Foster. 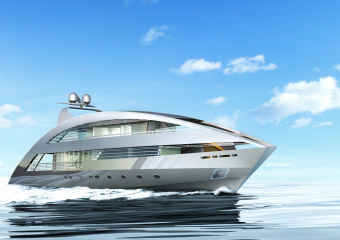 These striking Signature Series crafts offer 5,737-square-feet of usable living space, with five suites that can sleep up to twelve guests, in addition to chambers for the seven-person crew.

Foster's design focuses largely on the quality of light and views, and offers thirty percent more indoor and outdoor space than other yachts in its class. A team of seven architects from Foster + Partners spent fifteen months perfecting the design. The high-tech Rodriquez Cantieri Navali yard in Sarzana, Italy, was commissioned to build the yachts.

Each yacht features: The Program

YachtPlus' Luxury Management program offers owners a one-eighth stake in a super-yacht and a guaranteed thirty-four days of use each year, including eleven days in the Mediterranean, eleven in the Caribbean, and two cultural tours in either locale lasting six days each. Lifestyle Management can arrange for transportation, hotel accommodations and excursions for owners, ranging from golfing to vineyard visits.

Fractional owners pay an initial fee of 1,850,000 Euros, or about $2,479,646, and an estimated 200,000 Euros, or $268,069, annually to cover maintenance costs and other fees. Owners have access to any of the ten vessels planned for delivery over the next three years. Owners can opt out of the program at any time, and YachtPlus will re-market the ownership with proceeds, minus associated costs, going to the owner. Each yacht will be sold by the company after eight years to ensure that the fleet is kept up-to-date, and owners will receive full, pro-rated proceeds from the sale of the yacht at open market rate. 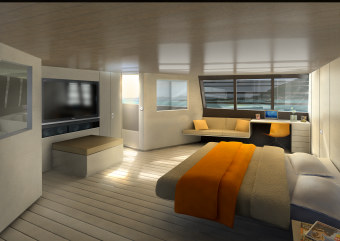 Owners Suite YachtPlus
If an owner is not able to use the yacht during the time they have scheduled, the company allows the vessel to be chartered, cutting losses for the owner.

The ownership does not allow the yachts to be used as security, which protects owners from creditors in the event of another owner defaulting on a payment or the company declaring bankruptcy.

When signing up for the YachtPlus program, owners each place a down payment and are required to sign up for the program within a month. Once each of a yachts' eight co-owners do so, construction of the yacht begins. The yacht is delivered approximately eighteen months later.

YachtPlus, founded in London in 2005, has commissioned ten Signature Series yachts, and has left the door open to add other vessels, of which owners of any yacht in the fleet would have use.