In March this year, SherpaReport looked at how the market for new business jets showed signs of a strong recovery, from a pandemic induced fall in 2020. In this article, we follow up by exploring the current, booming state of the market for pre-owned business jets.

The arrival of COVID-19 in 2020 produced an initial large drop in people traveling, whether for leisure or business. However, with people looking for safer ways to escape for vacation and remote working, and with business travel remaining essential in some industries, private aviation has bounced back and is seeing booming numbers, including a significant number of first-time customers. This has been true not just in terms of fractional jets and charter services, but also in terms of outright ownership.

Reports from the International Aircraft Dealers Association (IADA) for Q1 and Q2 of 2021 show that the current market for pre-owned business jets is strong. Sales by IADA members in April 2021 were double those of the same period in 2020, with 106 closed deals compared to 53 the previous year. The second quarter showed 320 closed deals, compared with 174 in the previous year’s Q2. This came on the heels of a strong first quarter (211 sales) and indicated a return to the pre-pandemic economy. In addition to sales, the reports showed a high number of deals that were under contract but not yet completed.

Aviation market research company AMSTAT found that current pre-owned business aircraft sales figures even top those of 2019. Business jet resales are up 47.1% over 2019 YTD and business turboprop resale transactions are up 24.8% over 2019.

The flip side of this strong market is a global lack of pre-owned aircraft inventory. IADA, Jetcraft, and AMSTAT have all noted that a mere 5-6% of the world’s fleet of business aircraft is for sale at the moment. So while demand is high, the stock of available inventory is at its lowest for decades. IADA Executive Director Wayne Starling has said of the current situation "The only negative on the horizon is that there is a shortfall of inventory. We have buyers with funds to purchase, but demand for late-model aircraft with attractive configurations exceeds supply, which could increase pressure on prices and lengthen transactions."

AMSTAT data, in the graph below, shows the number of used jets and turboprops available for sale, with large drops in the last few months. 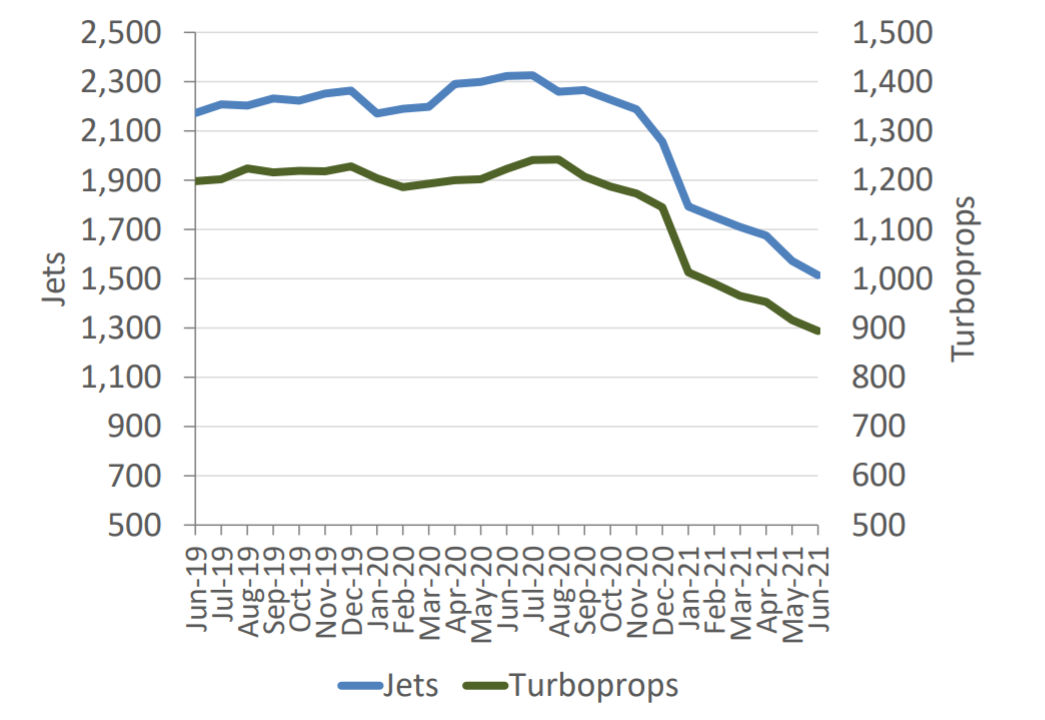 Oliver Stone is the managing director of London-based broker Colibri Aircraft. Stone says, "buying private jets is extremely difficult right now…. Multiple buyers and a shrinking inventory of available aircraft have made a very competitive market. We recently tried to purchase a late model Challenger 650 for a client, and at least six offers were made for this aircraft, which ended up trading close to its headline asking price. To say that the market is competitive at the moment is an understatement."

Viewed from any angle, the pre-owned business aircraft market is white-hot. We are seeing engaged sellers quickly matched with eager buyers for the bulk of the for-sale fleet, and there is no indication that this pace will slow any time soon.

The market for pre-owned helicopters is also strong. Aero Asset’s second-quarter market trends report shows a 15% stronger preowned twin-engine helicopter retail sales volume in the first half of 2021. At the same time, available inventory shrank by 10%.

Private jet finance company Global Jet Capital reports that overall 2,534 pre-owned units were sold in 2020, accounting for $11.3 billion. This was an increase of 200 units when compared to 2019. The company predicts that 2021 will see a further increase in pre-owned unit sales with an estimated $13.3 billion in transaction value. These figures indicate that the pre-owned aircraft market has been more resilient than the market for new aircraft over the last year. The company has seen a particular increase in demand for medium and large jets. According to Global Jet Capital, “Heavy aircraft offer owners longer range and additional passenger capacity—capabilities buyers have favored in the pre-owned market.”

According to AMSTAT’s findings, Q2 2021 saw pre-owned medium jets having the largest increase in sales, an increase of 133% over the same period in 2020. In terms of sales for the year-to-date, light jets have shown the greatest segment increase (96%). At the same time, these categories have seen the biggest declines in available inventory.

In terms of pricing, AMSTAT’s report shows that increased demand and decreased inventory have caused prices to rise. Values for pre-owned medium and heavy jets have risen an estimated 20% in the past year.

Why the Increased Demand?

Houses, cars, aircraft… it is a seller’s market at the moment. With high demand and low inventory, now is a great time to sell your business aircraft if you have been thinking about it, according to Jetcraft’s Senior Vice-President of Sales, Dan Kilkeary. He points to the low interest rates and the 100% bonus depreciation that is available until January 2023.

Aircraft sales specialists Jetcraft have put out a series of onsite posts discussing the current demand for pre-owned aircraft, and exploring the reasons behind it. There has been significant growth in demand for private aviation services as a result of the pandemic. That demand has been seen in all areas: fractional jets and charter services, as well as outright ownership. People have been seeking to travel after being stuck at home for so long, but with the disruption to commercial airline schedules and safety concerns when flying commercially, they have sought out alternatives. Flying privately allays concerns by allowing people to travel within their established COVID bubbles.

According to Global Jet Capital, while some of the new private flyers will revert to commercial flight when feasible, others will not, "much of the growth in jet charter and fractional usage is being driven by new entrants to the market looking to avoid crowded airports and aircraft in the midst of the pandemic. History tells us that while some of these users will revert back to commercial service when the pandemic is over, many will become regular users of business aviation, and some will eventually become owners and operators."

As for the lack of inventory, Stone says that it too has been caused by several factors, including an increased desire to travel safely, the re-opening of the U.S. before most other regions, and reduced commercial airline services. All of this “meant that more owners of private jets wanted to keep hold of their aircraft and a large number of first-time buyers entered the market,” Stone says.

Global shipping delays linked to the pandemic have caused supply-chain problems in a number of industries, including aviation. As a result, the availability of new aircraft is limited, a factor that further drives up the demand for pre-owned options.

Advice for Those Looking to Buy a Pre-owned Aircraft

Given the current demand for used aircraft, what advice would industry experts give to those who are looking to buy? Chris Hollingsworth, Sales Director with Jetcraft cautions against being in too much of a rush to buy. He says, “Inventory levels may be lower than in recent years, but there is still good quality inventory available. You’re more likely to find success if you give yourself extra time to secure your desired aircraft.” At the same time, he says that inventory is moving quickly, and an aircraft may only be on the market for a day or two. Once you do find the one that suits your needs, be prepared to act quickly but sensibly. Reuters recently reported that some buyers were so keen to make a purchase that they were willing to buy before undertaking even a pre-purchase inspection. Industry experts strongly advise against this plan of action. An aircraft that may look great on paper, might turn out to be a lemon after the inspections have been carried out.

Much of the current pre-owned inventory is not based in the United States but overseas. According to Wayne Starling, “about one half of those [currently on the market] are located internationally, and a high percentage are located in China.” Therefore, don’t narrow your search to the U.S. Be prepared to explore overseas markets. Hollingsworth echoes this, noting that recent purchases for clients have come from as far afield as South Africa, Malaysia, and Singapore.

Hollingsworth also suggests being willing to consider older aircraft. He reminds prospective buyers that older aircraft can be customized or upgraded. He says, “We’re seeing the value proposition of older pre-owned models increase, due in part to a growing number of maintenance facilities and the availability of cost-effective, high-quality refurbishment options worldwide.” Of course, with an older aircraft, detailed inspections are even more important.

Given the speed with which current inventory is moving and the complicated nature of purchasing a pre-owned aircraft, Hollingsworth recommends using an experienced broker or advisor to assist with your purchase. In addition to being experts in the paperwork and inspection processes, they are likely to have a broader network of sellers, increasing your chances of finding the right aircraft for your needs. Starling agrees noting "lower inventories and upward price pressures reinforce the importance of selecting the most professional aircraft sales team to handle both acquisitions and sales transactions. As the market shifts, it is crucial to pick advisors that are at the top of their disciplines."

This earlier article also provides an overview of the aircraft buying steps and process.