As very light jets start to become more widespread, we came across two that have their own very unique characteristics. One of them has been around for almost 50 years, the other one is due for first deliveries in 2008. Both of them have military and civilian guises. 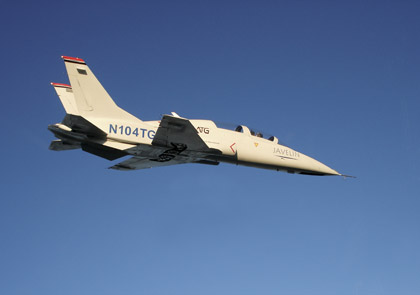 Yes, there is actually an aircraft out there, which has all the machismo, looks and performance of a military plane but is available as an executive jet! While there are several very light jets at various stages of development, the ATG Javelin (pictured left) will be the exotic sports car of the VLJ world. This two seater is designed to perform and handle like a jet fighter, with a 9,000 fpm rate of climb and a top speed of 540 ktas. It will be sold as both an airforce jet trainer and as a civilian jet.

To provide it's performance characteristics the Javelin has state of the art avionics, is built with advanced composite materials and has two Williams FJ-33 jet engines providing 1,800 pounds of thrust each. As is typical with VLJs it has a range of about 1,000 nm. The development model of the ATG Javelin fist took to the sky in September 2005, and it's FAA certification and first deliveries are eagerly anticipated in 2008. If you're interested in buying one outright, the price is about $2.8m. We haven't heard of any plans to put them in fractional programs as yet, but will be on the watchout as these launch.

Tagged as one of the most affordable light business jets ever made, the MS 760 Paris Jet (pictured right) has been around for almost half a century. It was unveiled at the Aeronautique Navale's public competition for a new jet trainer in the early 50s as the MS-755 Fleuret. It saw service in the French, Brazilian and Argentinian armed forces, amongst others, and was finally retired from the French Navy in 1997. Now over 30 of these planes have been restored in the US and given modern avionics systems in a light business jet category all its own.

The fully updated MS 760 is powered by two Turbomeca Marbore VI engines delivering 1,058 lbs of thrust and a top speed of 375 ktas. With total seating for four in an all glass cockpit, it can take you over 1,000 miles or about 3 hours of flying. The MS 760 is restored by Your Aircraft Source and is available under a fractional program from JetSet Inc based out of Toronto and Orlando. The fractional ownership provides 25 hours of flying time for $60,000, with monthly fees of $1,100 and hourly fees of $1,100.

You can read a broad overview of fractional ownership in our article "Fractional Jets Overview".