NetJets has Purchase Rights for AS2 Supersonic Business Jets

The new AS2 is the first supersonic aircraft to enter commercial service in over 50 years and the world’s first supersonic business aircraft. Last year the program completed a major milestone after concluding high and low speed wind tunnel testing, amassing hundreds of simulated flight hours which represent the equivalent of 78,000 nautical miles flown. Plans call for the start of production at Aerion Park in Melbourne, Florida in 2023. The manufacture of 300 AS2 aircraft is planned for the first decade of production.

The AS2 will have a top speed of Mach 1.4 (1,000mph) and a supersonic range of 4,200nm or a 5,400nm range at subsonic speeds. It is the first supersonic aircraft designed to be powered by 100% engineered synthetic fuel and reach supersonic speeds without the need for an afterburner.

Boeing made a significant investment in Aerion in early 2019 to accelerate technology development and aircraft design to unlock the potential of supersonic air travel for new markets. 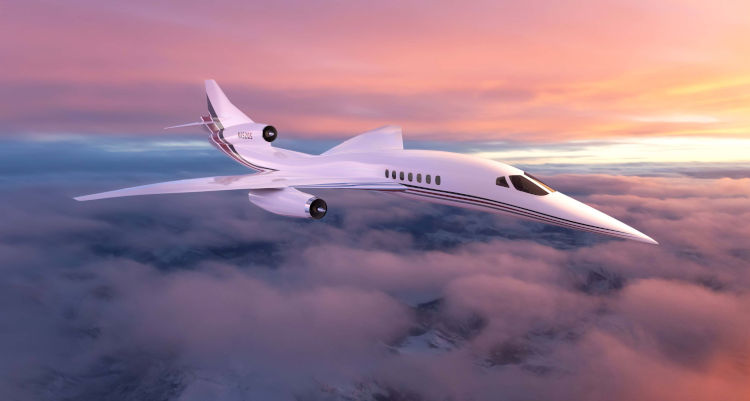 NetJets is the largest private aviation company in the world, with more than 760 aircraft worldwide, 385 of which were delivered in the past 11 years. The partnership announcement comes on the heels of NetJets’ newly launched Global Sustainability Program, a worldwide commitment to reducing the environmental footprint of the brand and its Owners, with a focus on sustainable aviation fuel (SAF) investment, corporate and consumer offsetting.

Aerion and NetJets say they are united by a shared commitment to usher in a new era of sustainable flight that is kind to the planet and part of the solution to reverse climate change. As part of this agreement the two companies will also work together on domestic and international actions intended to facilitate the global availability and broad adoption of synthetic aviation fuels.

“Together, we will be exploring the integration of the AS2 supersonic business jet into NetJets’ global network,” said Adam Johnson, Chairman and CEO of NetJets Inc.

“At Aerion our vision is to build a future where humanity can travel between any two points on our planet within three hours and this new partnership is a significant step towards realizing that vision,” said Aerion’s Chairman, President & CEO, Tom Vice. “Our strategy is to connect the very best partners in the world within a new mobility ecosystem optimized for speed and founded on sustainability.”

“As the leader in private aviation, we constantly look for ways to be on the cutting-edge, and expanding our fleet to become the exclusive business jet operator for Aerion Connect is a thrilling next step,” added Adam Johnson, Chairman and CEO of NetJets Inc.

Flexjet was the first private operator to commit to buying the AS2, with an announcement made at NBAA-BACE in 2015. The list price tag for the 20 aircraft was reported as $2.4 billion in 2015.

Avion Pacific placed a more recent multi-aircraft order for the AS2 supersonic business jet. This order represented the first AS2 customer in China and extended Aerion’s global order backlog for the AS2 to a value of more than $6.5 billion.

Aerion says its global order backlog for the AS2 is now valued at more than USD $10 billion.