The private jet company, Jet Linx, likes to emphasize its local connections as it expands its network of bases across the country. The newest centers that are due to open are in New York, Boston, and Chicago. SherpaReport talked to CEO Jamie Walker about the expansion and the companies model for growth.

Jet Linx was founded in Omaha, Nebraska in 1999 and since then has mainly opened bases across the middle of the USA. A base in Scottsdale, AZ is the furthest west the company has gone so far, and in 2015 they started in Washington, DC, bringing the total at the time to 14 locations. 2018 will see three new bases in the Chicago, New York, and Boston areas, all of which have openings planned for September 1st.

“We’ve been working over the past year to develop a greater presence in the North East specifically Boston and New York,” said Jamie Walker.

Jet Linx is keeping the exact locations under wraps until an upcoming formal announcement, but Jamie says they have signed leases and have local partners. “We’ve been working on these for over a year” he added. For each new location, the company likes to have a couple of aircraft in place, and Jamie noted that it takes time to find the right planes that fit their model.

The company manages aircraft for a variety of owners. “The sweet spot is entrepreneurs, who typically use their plane for both business and leisure,” said Jamie, “and we also support some Fortune 500 corporate flight departments” he added.

The critical piece to the model is that the aircraft owner recognizes that they have an underutilized asset, and they want to see that asset (the plane) used to generate some revenue.

The aircraft vary by location. “In Omaha, we have more light and mid-size jets” explained Jamie, “because you can get to either coast on a mid-size from the center of the country” he continued.

He went on to explain that the aircraft mix will be different in New York, where they see more super-mids and heavy jets because these can go from coast to coast across the country. Or even potentially across the ocean.

In other words, the mix in the fleet reflects the local markets that they serve, so the North East sees more of the bigger aircraft.

The total Jet Linx fleet is now over 100 aircraft, spread across the 14 current locations.

The program offered by Jet Linx is more of a membership than a traditional jet card. There is an initial joining fee of either $12,500 for the Club Card level or $17,500 for the Executive Card level. After that, the flights are on a “Pay-as-you-go” basis, under which you just pay for the hours you fly. So there is no large six-figure deposit, as with most jet cards.

The program has guaranteed hourly rates and guaranteed availability for light, mid, super-mid and heavy jets on 365 days per year. The rates vary, starting at $3,375, depending on if they are one way or round trip, but they are all inclusive except for fuel surcharges and FET.
“We founded the cards program in 2004 and started out with a traditional 25-hour card program,” noted Jamie, “but we found consumers would rather hold onto their $100,000, so the program has evolved.” Jet Linx switched to the current membership structure about five years ago and now have well over 1,300 members.

Just like the other elements of their operations, Jet Linx emphasizes the local nature of the jet card. With members signing up in each of the 14 local markets. 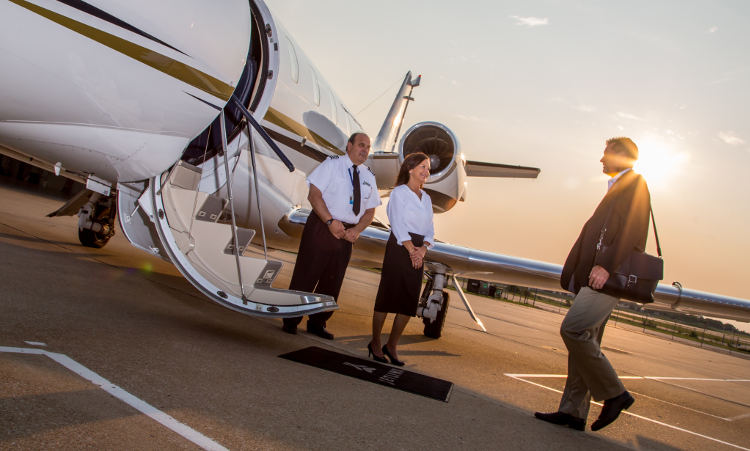 As each new base location opens, Jet Linx works with a local ownership partner to build and grow the base. “They are pillars of the local community” states Jamie “and they bring local credibility and trust,” he adds.
The emphasis is very much on the local, for instance, card members call a local number to reserve a plane, deal with local representatives, fly on local planes and fly with local pilots. In walking through the Jet Linx model, Jamie makes it very clear that he considers this a vital benefit of the business compared to the large national aviation providers.

Overall the company is replicating what local charter companies are so good at but combining this with the buying power of over 100 aircraft. So, with this fleet size, they can get deals on fuel and maintenance.

Over the course of the next 3-5 years, Jamie sees the company “filling out our domestic growth strategy.” They are not yet established on the West Coast, so he says this is undoubtedly part of their future plan, and he’s identified 85 cities that could be a fit for their model. Jet Linx has not looked beyond domestic markets so far but plans to move into major US markets.