Jet It Expands to Canada and Beyond

Last year, SherpaReport took a look at up-and-coming aviation company Jet It. The North Carolina company was established in late 2018 to offer fractional ownership of the HondaJet Elite aircraft. The company quickly garnered attention with its day-use model and its guaranteed residual values. This latest article looks at their continued progress and recent announcements for further expansion. 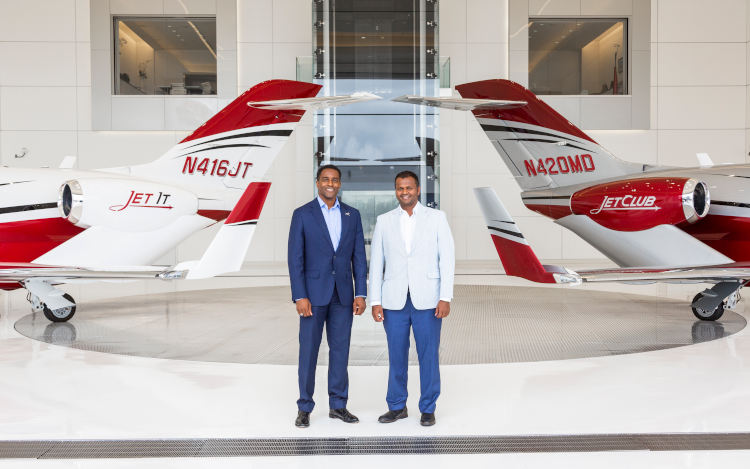 Jet It co-founders Glenn Gonzales and Vishal Hiremath both worked for Honda Aircraft when they had the idea to venture into shared private aviation. As they talked to prospective buyers, they frequently encountered people who were interested in the HondaJet Elite, but who were not ready to buy a whole jet. The pair set up Jet It to offer fractional shares of the light jet.

As CEO of Jet It, Glenn Gonzales is the only African-American owner of a private aviation company in the U.S. A former fighter pilot, and instructor at the USAF Academy, Gonzales holds master’s degrees from the University of South Carolina and Embry-Riddle.

Ownership with Jet It

Gonzales and Hiremath came up with the idea of a day-use model of ownership which is different from the standard hours based model in the fractional market. Once an owner has booked an aircraft for the day, they can use it as much or as little as they want during that day period, while only paying for actual flight hours. The minimum flight time is just 30 minutes, as opposed to the one-hour minimum that most fractional companies require. The fee per flight hour is just $1,600, the lowest on the market.

Vice-President of Strategy, Dr. Akir Khan refers to the Jet It model as “the evolution of travel”. You can choose to fly to one destination, fly home again, or fly on to another location all in the same day. Khan says, “It’s your Air Force One”. An additional bonus is the 24/7 concierge service that can take care of any problems that arise. If you spill coffee on your shirt midflight, with one phone call, someone will meet you at your destination with a new one in hand.

Fractions are available in various size increments, starting with the “Jet 10” (a 1/10th share allowing 25 days per year) and going up to the “Jet 2” (a half share with 130 days per year). If there are unused days, some may be rolled over to the next year.

Another eye-catching aspect of Jet It membership is the chance to be part of their “Red Jet Squadron”. This allows owners who are also qualified pilots to fly as a co-pilot with a Jet It Captain.

The jets are also available for charter when not in use by owners, and Gonzales says this has allowed many prospective members to get a taste before committing to a share. 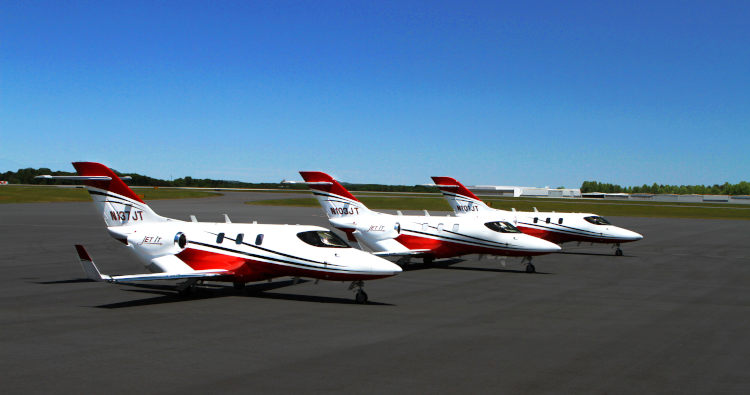 Despite the pandemic, 2020 proved to be an exciting year for Jet It as the fleet, crew, and customer base all grew. When the company first began, it had just one aircraft and half a dozen staff. By the end of 2020, the U.S. fleet consisted of 10 planes, managed by a staff of 60. Six of those new aircraft had been delivered in the final quarter of the year.

While many companies have found themselves struggling during the pandemic, Jet It saw an opportunity to push further by raising awareness of the company and the options it has on offer. “The Covid environment has created an opportunity, and it’s allowed us to introduce ourselves to a broader segment of the market,” Gonzales said. “It’s our job to retain those individuals, so we’re working aggressively to not only provide them with the exceptional service that they expect, but to show them it can be accomplished at a reasonable price.”

The company received additional attention within the aviation marketplace when Harvard Business School performed a case study of the company. Philanthropy is another important aspect of business at Jet It; the company has partnered with several organizations including Be the Match, Wounded Warriors, Pilots and Paws, and Veterans Airlift to provide charter air services.

The new year brings even bigger plans. CEO Glenn Gonzales hopes to have doubled the size of the U.S fleet by the end of 2021. Jet It’s service area has until now been concentrated on the East Coast. However, plans are underway to expand to the West Coast, Canada, Europe, and Southeast Asia.

“It’s going to be an exciting year,” Gonzales said. “Jet It is expanding out West, but 2021 will include Jet It Canada. Equally exciting in 2021 will be JetClub. We will have our first airplane in operation in Europe, but we’ll also be expanding into Southeast Asia, including Singapore, Vietnam, India, and wherever else the market will allow.”

Hiremath is overseeing the launch of JetClub, the new operation in Europe and Southeast Asia. It will operate along the same lines as the US model and is in response to demand for service in these regions. Originally, the plan was to keep the same name overseas but, Gonzales said they found that “It” of “Jet It” did not translate well, hence JetClub.

Meanwhile, Gonzales is excited about new ventures in North America. In a recent announcement, he shared that Jet It will be partnering with Sky Service, one of the largest private aircraft FBO, aircraft service, and management companies in Canada. There are also several fractional owners already on the West Coast and operations are expected to expand there. When asked about his goals for the coming year and Jet It, Gonzales says, “Jet It is the evolution of transportation. We will continue to be on the leading edge of the industry, continuing to expand globally, and offering key regional connections.”