Several recent forecasts show good growth in the sales of new business jets over the next decade. Some of the forecasts have the market growing for the next five years and then turning down. Others see consistent growth over the ten year period.

We’ve looked at the forecasts from both manufacturers such as Honeywell and Embraer, from brokers Jetcraft and from analysts at the Teal Group, so overall there’s a very good group with insider industry knowledge.

Within this group the forecasts range from 8,755 to 9,200 new business jets being sold over the next decade. The dollar value of these aircraft is predicted to be in the range $259bn to $277bn.

Both of the manufacturers, Honeywell and Embraer, see the market growing fairly consistently over the next decade. Both of them also see the biggest drivers of this growth coming from mid size, super-mid and large cabin jets. Sales of ultra-long range planes will also see some growth but smaller jets will stay fairly level over the period.

Jetcraft and Teal Group are forecasting the market will peak somewhere between 2019 and 2021. Jetcraft has a peak in 2021 and Teal Group in 2019. Both then expect the market to drop off in the ensuing years, with Teal Group saying it will drop off a little but still be above todays level, while Jetcraft have a much larger fall. Jetcraft see the growth coming in light jets, in addition to mid and super categories, and also some good growth in ultra-long range sales.

Jahid Fazal-Karim,Chairman of Jetcraft,said“We wanted to provide an objective, comprehensive forecast of the sector, given our industry’s lack of predictability since 2008, from a viewpoint that no other party could offer. Our unique position in the transaction process—sitting between buyers and brokers on one side, and OEMs on the other—gives us a unique perspective on one of the most watched sectors globally.” 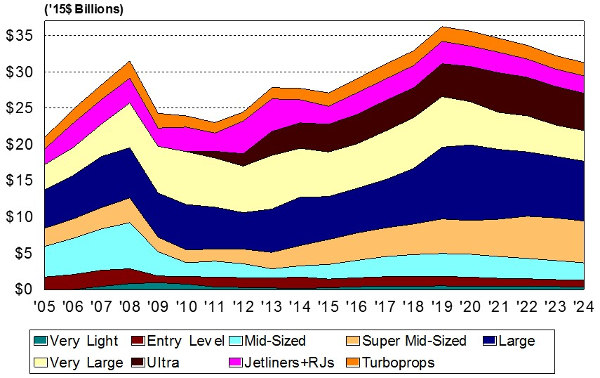 At Jetcraft, President Chad Anderson said “We noticed some definitive behavior in the current business cycle. Customers are tending to shy away more from emotional purchases. Companies are allocating some cash reserves to buy back shares (and as a consequence away from aircraft purchases).”

Honeywell noted “Operators continue to focus on larger-cabin aircraft classes, ranging from super mid-size through ultra-long range and business liner, which are expected to account for more than 80 percent of all expenditures on new business jets in the near term.”

Jetcraft forecasts that nearly 50% of the market by value will be sales of ultra-long range jets, such as Globals and G600s and G650s. Super-mids are their next largest category with about 13% of the market value.

Both Honeywell and Embraer see about 75% of the demand coming from the established markets in North America and Europe. With Embraer saying North America will produce 54% of the unit sales and 50% of the $ value.

Jetcraft also forecasts that the North American region will increase its share (compared to the rest of the world) of total aircraft unit deliveries to 54%.

In terms of the biggest sellers amongst the manufacturers, Jetcraft has Bombardier coming out on top in both unit sales and dollars. They predict that Bombardier will sell 2,124 units, equal to 24.3% of the unit sales, with a value of $85.7bn, or 31.6% of the market revenue.

The Teal Group expects Gulfstream, to generate the largest revenues over the period, taking 32.5% of the market by $ value. This is driven by both current and upcoming models of large and ultra-long range jets.

While the overall numbers for the next decade are broadly in line from each of the forecasters, there are clearly some differences in the details.