The newly released ten-year forecasts for the business jet industry suggest that things are definitely looking up for new private jet sales.

Bill Kircos, Vice President of Global Marketing at Honeywell Aerospace says that several factors will contribute to “higher deliveries in 2019 after a virtually flat year in 2018.” He projects “solid growth in 2019 and 2020” and “a significant impact on new business jet purchases in the midterm and long term.”

Our annual report on the state of the business jet industry draws upon expertise from several key business insiders, including manufacturer Honeywell, brokers at Jetcraft, and analysts at JETNET iQ.

According to industry forecasts, the next ten years will see between 7,700 and 8,736 new business jet deliveries, with a total dollar value of between $251bn and $271bn. This is an interesting change upon last years figures; while the projected number of deliveries has not increased significantly, the projected dollar value has increased by approximately $30bn. Honeywell is providing the most conservative estimate with a projected delivery of 7,700 units while Jetcraft predicts sales of 8,736 units. Trade publication Aviation Week mirrored these projections with their own forecast of 8,683 units being delivered in the next ten years, a 1.4% annual growth rate.

The forecasts provided some insights into various factors that might continue to hinder the growth rate over the next few years. Brexit and slow economic growth are still creating uncertainty in the European market, and various geopolitical factors are affecting regional markets. Jetcraft speculates that while companies are seeing strong economic growth, many are choosing to pay off corporate debt (currently at historically high levels) before planning new capital acquisitions. A JETNET iQ survey found that optimism is increasing and 69% of their global clients surveyed believe that the industry is now past its low point. Nevertheless, they do cite some concerns about the market, namely worries about an international trade war, increasing difficulties in recruiting and retaining staff (pilots, mechanics, technicians), and the changing needs of the younger Millennial demographic. 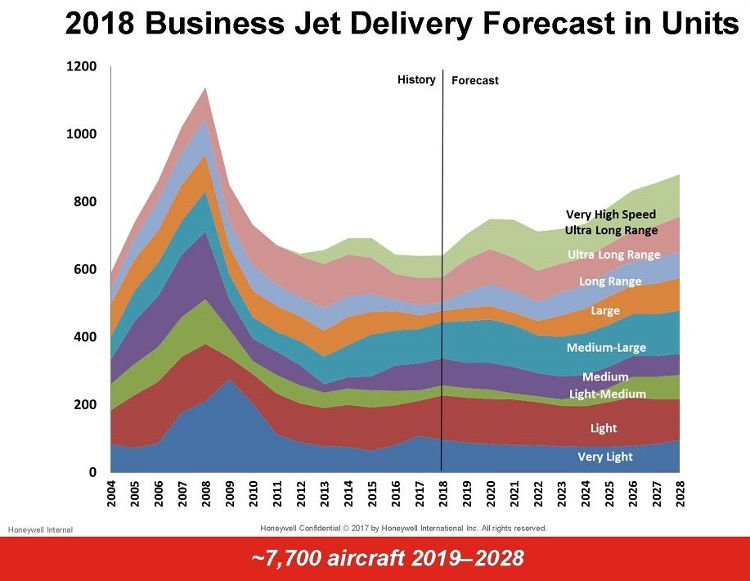 Whereas last year, Honeywell projected that deliveries would remain equal to those in the previous year, the company says that 2019 deliveries will exceed those of this year. Key factors for the increase are a stronger market for used aircraft and the number of new aircraft models entering service in 2019. The company sees strong growth in the short to medium term. 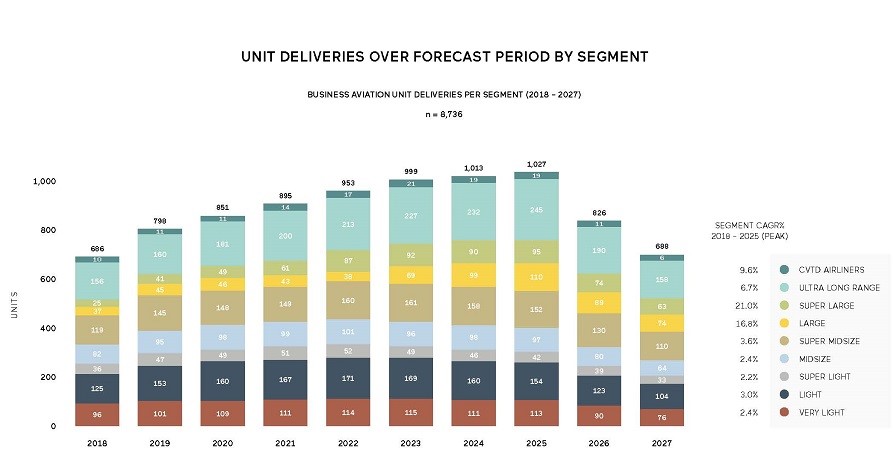 Like Honeywell, Jetcraft foresees a continuing and climbing demand for super large, ultra long range, and converted airliners, and notes that Bombardier, Dassault, and Gulfstream all have new models within these classes entering the market in 2019. Cessna will remain the leader for units sold, claiming 27.7% of the market. Meanwhile, Gulfstream takes back the number one spot for revenue, with 30.5% of the market share. Last year’s number one, Bombardier, falls to number two with 29%. 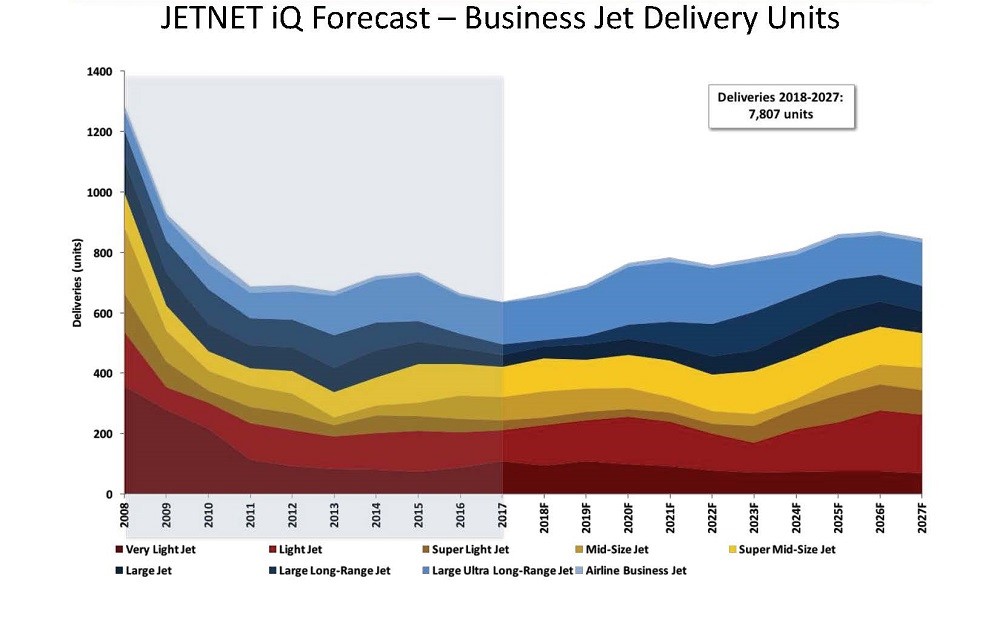 Honeywell, Jetcraft, and JETNET iQ all see a continued increase in demand for larger aircraft classes – those in the super mid-size to ultra-long range categories, and even converted airliners. Honeywell estimates that these categories will account for more than 87% of all expenditures in the next five years. As last year, Jetcraft’s estimates are more conservative but still predict the large aircraft accounting for 32% of all units delivered, and 64% of total revenue.

Not surprisingly, North America retains its domination of the business jet market, with Europe keeping hold of second place. All three of the reports consulted for this article give North America 60-61% of the market.

Honeywell reports a significant increase (14%) in purchasing plans for Europe but notes that this improvement will be a longterm one. Brexit and the European economy are still going to keep short to mid-term growth slow. Jetcraft also sees a significant growth (11%) in the future European market. JETNET iQ records a small growth in the European market since last years forecasts – from 14% to 14.6%.

Last year, JETNET iQ placed Latin America in second place, above Europe, with 15% of the market share. However, this year, that has dropped to 12.3%. Both Honeywell and Jetcraft predict a further decline in the Latin American market, with a drop of as many as 7 percentage points. An increased demand in Brazil is expected to be canceled out by a decrease in Mexico.

Elsewhere, Honeywell predicts small declines in the Asian-Pacific, Middle-Eastern, and African markets, largely due to currency fluctuations, political tensions, and regional conflicts. However, Jetcraft’s report forecasts growth in all of these regions, with a predicted 13% growth in the Asian-Pacific market. Time will tell who is right.

Impact of the Used-Aircraft Market

This year’s reports make frequent mention of the used-jet market and how changes there will affect the market for new purchases. Honeywell notes an increase in asking prices for used aircraft and a decrease in the number of used jets available. In particular Honeywell notes "The total number of recent model jets (less than 10 years old) listed for resale is down 30 percent year over year and is now just slightly higher than 5 percent of the installed base. This is well below historical average of about 8 percent." JETNET iQ also notes the smaller inventory of used jets available for resale. Jetcraft makes an interesting point about how rapid technological advances are starting to have an influence on sales of pre-owned aircraft. They note that cabin connectivity has improved at a vast rate and that customers now expect to have that high level of connectivity. Many pre-owned jets, even if they are just a few years old, cannot meet this required level, meaning that owners will either need to pay for major upgrades or see a loss in resale value.