At the National Business Aviation Association Business Aviation Convention & Exhibition (NBAA-BACE) in Las Vegas, Flexjet announced that it has placed orders for new aircraft from both Embraer and Gulfstream. The Embraers include the brand-new Praetor mid- and super midsized aircraft and Phenom 300 light jets. The Gulfstream planes are the flagship ultra-long range G700.

The two companies have been working together for over 16 years and this is the fourth time Flexjet’s management team has introduced a new Embraer jet to the fractional market. The first time was in 2003 when Flight Options (a Flexjet predecessor company) bought the Legacy Executive, the other planes have been the Phenom 300 in 2010 and the Legacy 450 in 2016. 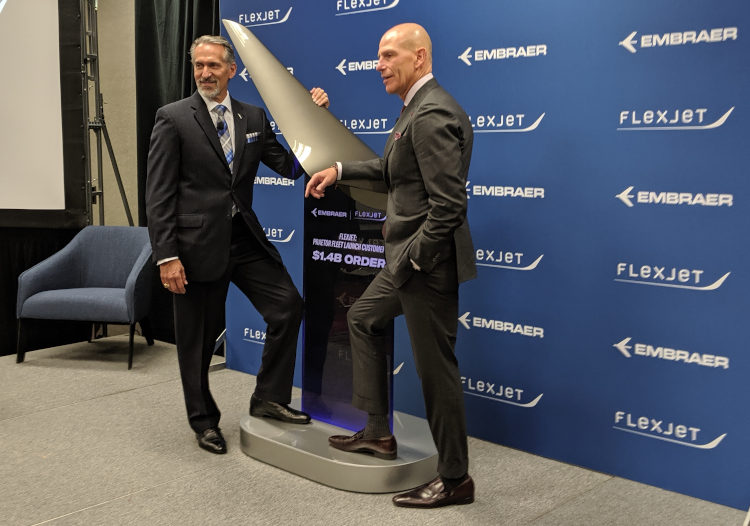 “The spirit of innovation at Embraer keeps us coming back time and again because it dovetails perfectly with our commitment to provide the youngest, most modern fleet to our Owners,” said Michael Silvestro. “These aircraft are sure to be crowd-pleasers with their extraordinarily long range and impressive speed for aircraft of their size.”

Flexjet currently have 70 Embraer Phenom and Legacy aircraft in their fleet. The midsized Embraer Legacy 450 has proven popular as a key component of the premium Red Label by Flexjet offering. And nearly 35,000 hours of flight data from Flexjet owners fueled Embraer’s development of the Praetor.

Building off of that platform, Flexjet will be converting its full Legacy 450 fleet into Praetor 500s. Michael Silvestro told SherpaReport that Flexjet had already sold out the shares on the first Praetor 500 and are now selling the second of these aircraft. Embraer plans to start delivery of the Praetor 500 in the next 3-4 weeks. Flexjet has not yet started to sell shares in the Praetor 600. The exact mix of planes it takes under this new order will vary with market demand. 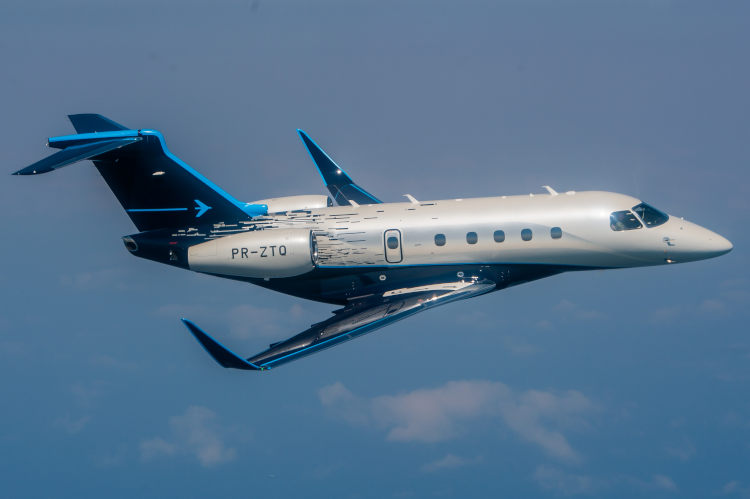 The Praetor upgrades the Legacy 450/500 into a true corner-to-corner, transcontinental and, in many cases, transoceanic aircraft. The Praetors have ranges of 3,843 statute miles for the Praetor 500 and 4,623 statute miles for the 600 and are powered by advanced, fuel-efficient Honeywell engines. The distance capabilities are possible because of the jet’s increased fuel capacity and much larger, aerodynamically efficient winglets. Both aircraft offer a low cabin altitude, which remains practically at sea level through 27,050 feet and gradually rises thereafter to a maximum of only 5,800 feet when at 45,000 ft. The cruising speeds are 540+ mph, with a ceiling of 45,000 feet and good short takeoff field lengths - 4,222 feet for the Praetor 500 and 4,717 feet for the Praetor 600.

“The Praetors are the most technologically advanced and most disruptive aircraft, created to dominate the mid- and super midsized business jet market,” said Michael Amalfitano. “And we couldn’t be more delighted that industry innovator Flexjet, our partner for more than a decade, is making the most modern aircraft available to its Owners.”

Gulfstream announced the G700 on the eve of the 2019 NBAA-BACE in Las Vegas, and at the same time said Flexjet will be its first North American fleet customer for the new flagship.

“The G700, with its speed, range, and versatility, will make an exceptional fractional offering,” said Flexjet chairman Kenn Ricci. “We anticipate that it will be ideally suited for those companies that need occasional access to global markets and will be the pinnacle of our Red Label offering.” It will be the fifth large-cabin aircraft type in the fleet as we continue our international expansion.”

Flexjet placed a firm order for 16 G700s worth $1.2 billion at list price. It already operates G650ERs, G500s, and G450s, and was North America launch customer for the G500. The G650's are available under a day based fractional program, that the company introduced earlier this year. Flexjet plans to make the G700 available for its Red Label service, which includes dedicated crews and other perks.

Mark Burns, president, Gulfstream noted “The G700 perfectly complements their existing Gulfstream fleet and combines the best of what we do – performance, innovation and comfort – with the largest cabin in the industry and the most advanced technology.”

The other aircraft in the fractional fleet at Flexjet include the Learjet 75Lxi, Bombardier Challenger 350, the Challenger 300 and the Global Express. Plus in 2015 the company placed orders for twenty supersonic Aerion AS2 jets, which are now expected to enter service in the 2025-2026 timeframe.

In anticipation of these substantial orders, Flexjet has been aggressive in recruiting pilots this year and recently met its 2019 goal of hiring 175 new pilots.