De-icing Private Aircraft – What You Need to Know

Winter weather brings its own set of challenges to air travel. Those flying commercially may be all too familiar with the delays caused by snowstorms or ice on the runway. But for those flying privately, the snow can bring another headache: a financial one. Whether you own, charter, or lease an aircraft, you should be aware of any de-icing costs that may come your way. This article explores the methods of de-icing, when it is needed, and how much it costs.

Ice, snow, freezing rain, and sleet can all cause potential problems when flying. Patrick Harris of Velocity Jets explains that accumulations on the plane’s wings and tail must be dealt with before departure. He says “The design of these aircraft features is created with a specific shape to provide proper lift for the flight. If ice and snow pile up on these areas it interrupts the airflow across the surface, hampering the capacity to create lift which is necessary for the aircraft to fly.”

FAA rules state that if a pilot notices any accumulation of snow or frost, he must ensure that it is dealt with before takeoff. All lifting surfaces must be clear prior to departure. This means the pilot will contact the airfield’s de-icing facility. Perry Breitenstein of Cutter Aviation says he has yet to meet a pilot who does not follow this rule 100%. It is far too important to ignore. 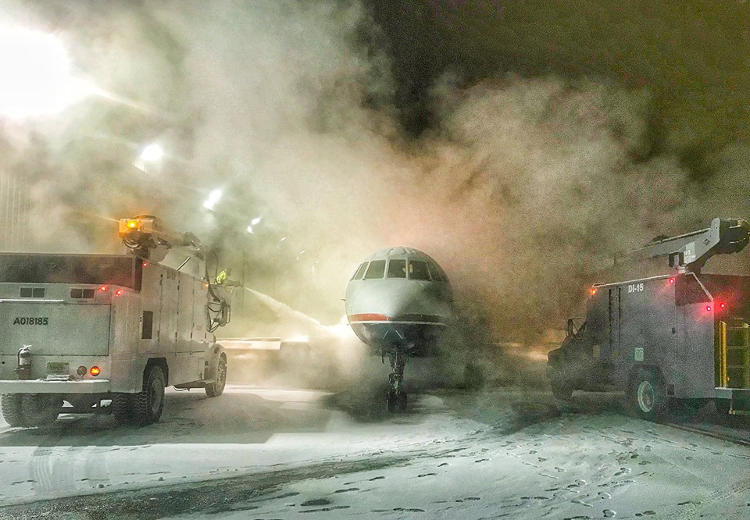 Just as we use a deicer on our cars during bad weather, a similar de-icing solution will be used on the aircraft. Harris explains that a mixture of glycol and water is heated and sprayed at high pressure to remove the snow and ice from the plane’s surface.

While this is effective in removing existing snow from the surface, it will not usually prevent further accumulation. If it is still snowing and there is a risk of further build-up during flight, an anti-icing agent may be used. Anti-icing fluid contains a higher concentration of glycol than is found in regular de-icing fluid. Harris says, “The freezing point for this liquid is below 32 degrees Fahrenheit or zero Celsius, thereby preventing the wintry precipitation that falls into it from freezing on the plane’s surface. Anti-icing fluid is also thicker than de-icing fluid to help it adhere to the aircraft surfaces as it takes off.”

Ryan Foss is Director of Flight Support at Magellan Jets. He says that the decision regarding whether to use just deicer or to also use an anti-icing fluid will depend on the severity of the weather. He notes that the usual deicer mix of glycol and water “is used to remove contamination from the aircraft” and “can also be utilized as anti-ice during very light accumulation with a short hold-over time.” However, if there is active precipitation after the removal of the ice or frost, the anti-icing agent will be used to “provide a protective layer on the critical surfaces of the aircraft.” These critical surfaces include the wings and the tail. On rear-engined aircraft, Foss notes that the anti-icer will also be used on top of the plane, to prevent snow from getting into the engines.

The hold-over time that Foss mentions is the amount of time that an aircraft can remain on the ground after de-icing. If the aircraft stays on the ground for too long after de-icing, the process will need to be repeated. In other words, the aircraft has a limited amount of time to get in the air, otherwise it will need to be de-iced again. Times vary according to the type of precipitation, air temperature, and so on. According to Foss:

Given the short potential hold-over times, de-icing is often done after the passengers have boarded the plane. But Harris says that there is nothing to worry about. The fumes from the deicer are non-toxic, although they do apparently smell of maple syrup! Nevertheless, for the passengers’ comfort, pilots will “temporarily disable the aircraft’s ventilation system to prevent fumes from entering the cabin.”

When flying commercially, the cost of de-icing is not a factor for the passengers. However, if you are chartering or if you own an aircraft, this is an additional expense that you will need to consider for winter flights. According to Foss, de-icing fluid will typically cost $20 or more per gallon. Anti-icing fluid can cost $25 or more per gallon. The amount needed will vary by type of aircraft, air temperatures, and the length of time the aircraft was parked outside, but it is easy to see how the costs can quickly mount. Harris counsels that costs can run into the thousands of dollars. Price estimates range from approximately $1,500 for a small jet to as much as $6,000 for a long-range jet. He advises asking your broker if the planes are kept in hangars. Where possible choose a hangared aircraft. Harris says, “Utilizing stored planes will only cost a few hundred dollars by comparison and will most likely keep any charges below the thousand mark.”

Foss also advises reserving hangar space wherever possible to save costs on de-icing. For both Magellan and Velocity jet-card customers, de-icing is billed to the client after the flight, once the number of gallons has been calculated. It should also be remembered that de-icing is subject to a 7.5% Federal Excise Tax. Hangar space, on the other hand, is not subject to tax.

“Winter flying definitely offers additional challenges like ice and snow,” says Breitenstein. He stresses the importance of planning ahead. “Does the airport have deicing equipment and space in a hangar? Is it going to snow overnight?” He cautions that this is one area where it is better to be safe than sorry.

So what does all of these mean for you, the private jet passenger? Be aware that travel during winter months may incur these higher expenses to cover de-icing costs. And remember that the process of de-icing the plane may delay your take off time. However, the extra cost and any delays are a vital part of ensuring that your trip can take place safely, without any unnecessary risk.